For most systems that you will simulate, advection will typically be the dominant transport process that you will model. As we will discuss in later Units, for many systems the processes of diffusion and dispersion will also be important. However, there may be some types of processes that transport and/or modify the mass in your system that cannot be easily described using just advection or diffusion. This is typically because they are relatively complex processes (e.g., animal burrowing, plant uptake, chemical treatment) that would be very difficult to fully describe and represent accurately using the actual physical and chemical processes controlling them, but can be readily approximated using a simplified approach.  The next two Lessons will discuss these.

The first process we will discuss is referred to as “direct transfer”.  Recall that for advection, the mass transfer rate out of a Cell is simply QC, where Q is the flow rate of the medium, and C is the concentration in the medium.  In the absence of solubility constraints, the mass transfer rate is actually proportional to the mass in the Cell (i.e., it is a first-order rate).  That is, it could be rewritten as KM, where M is the mass and K (a rate constant with units of inverse time) is a function of the media quantities and partition coefficients.

What if we wanted to move mass at a specified rate (that was proportional to the mass in the Cell), but the process does not really involve the movement of a Fluid or Solid?  For example, suppose that you were simulating the uptake (transfer) of mass from soil to a plant, and the transfer rate was proportional to the amount of mass in the soil (but differed from species to species). The “Direct Transfer” mass flux link in GoldSim provides a way to represent this.

To illustrate how to create and use such a mass flux link, we will start with a simple Example, and add one of these mass flux links to it. This model, named ExampleCT15_Direct_Transfer.gsm, can be found in the “Examples” subfolder of the “Contaminant Transport Course” folder. Open it now.

The model is quite simple.  It contains two Cells (Surface_Soils and Plant).  There are two Solids defined (Soil and Plant_Material). The Surface_Soils Cell contains Water and Soil.  The Plant Cell contains Water and Plant_Material. There are three species (A, B and C).  1 mg of all three species are initially present in the Surface_Soils Cell. If you look at the Transfer_Rate Data element, you will see that we have defined three different transfer rates:

The transfer rate is zero for A, 5 %/day for B and 10%/day for C. These are percentages of the entire mass in the pathway. We are going to create a Direct Transfer link between the Surface_Soils Cell and the Plant Cell. To do this, open the Surface_Soils Cell and go to the Outflows tab. Press Add Outflow.  You will be presented with a dialog for which pathway to link to (there is only one possibility in this simple model, the Plant Cell).  Select it and press OK.  The following dialog is displayed:

The default is to create an advective outflow (of Water).  But that is not what we want to do here.  To create one of the specialized mass flux links, we click on the Medium drop-list to display the other choices:

The drop-list displays Water (the only medium shared by both Cells), and then three choices for the specialized mass flux links.  We will select “Direct_transfer_rate”.  When we do so (and press OK), the dialog looks like this:

We now must specify a Transfer Rate for this mass flux link.  This must be a vector of species with dimensions of inverse time (defining the first-order rate). Enter a link to the existing Data element for this input (Transfer_Rate).

Close the Cell and run the model.

Double-click on the Mass in Soil Time History Result element: 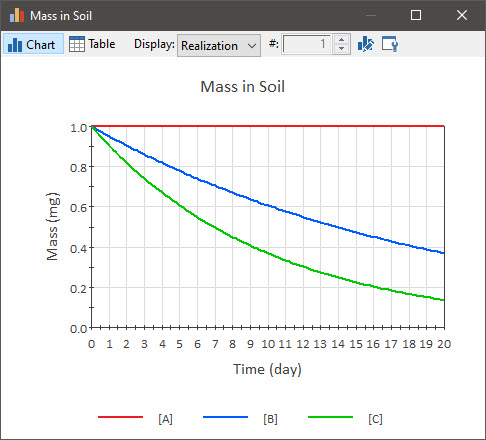 The Mass in Plant is a mirror image of the Mass in Soil:

Note: A completed version of this model, named ExampleCT15_Direct_Transfer_Complete.gsm, can be found in the “Examples” subfolder of the “Contaminant Transport Course” folder.

Several points regarding this specialized mass flux link should be noted:

The Direct Transfer mass flux link provides a generalized way to move between pathways when the process you are trying to represent cannot easily be represented just using advective (or diffusive processes.

In the next Lesson, we will introduce another such specialized mass transport mechanism.