Before showing how you would actually simulate suspended particulates in GoldSim, let’s take a moment to discuss why they can be important with regard to advective transport.

Assuming we have only one Solid (and Water), and M is the mass of species in the Cell, V is the volume of water, G is the mass of solid, F is the fraction of the solid suspended, K is the partition coefficient, and Csol is the solubility limit, we can compute CW under the various conditions we may encounter. To make the impact of these equations easier to understand, let’s assume the following values:

The effective concentration, CW, can then be theoretically computed as follows for the various conditions outlined below:

So what can we conclude from these equations (and example calculations)?

Secondly, if the species is controlled by solubility, the solubility limit can also decrease the effective concentration (available for advection).  Again, however, if at least some of that Solid is suspended, it can lessen this impact.

These simple calculations demonstrate the potentially large impact of suspended Solids.  In particular, for species that sorb onto the suspended Solids, the effective concentration in water (and hence the advective mass transfer rate) can be significantly increased.

So now that we understand their impact, how do we tell GoldSim that Solids are suspended?  As discussed in Unit 5, Lesson 7 this is actually quite simple. In particular, when specifying a Solid medium, you select the box marked “S”: 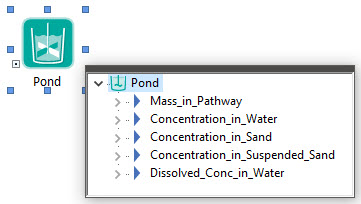 When we create an advective Outflow from a Cell with suspended Solids, the following points are important to note:

Note: When simulating Fluids within porous media (something we will start to discuss in the next Unit), it would often be inappropriate to specify that a Solid was suspended (unless the particulates were very small), as most suspended particles would likely be filtered out.

In the next Lesson, we will work through an Exercise involving suspended Solids so that you can make sure you are comfortable with representing these in your models.