Advection is the transport of material (e.g., contaminants) via the bulk movement of the medium in which those materials are dissolved or suspended. So far we have been describing advection via the Reference Fluid (which is almost always water).  Although most advective processes you will need to simulate will indeed involve the Reference Fluid, conceptually, advection can also take place via the bulk movement of a Solid. For example, a Solid (e.g., soil) could contain some chemicals (e.g., that were either be sorbed or precipitated onto the soil), and the soil itself could then be moved in some manner from one location to another. Mathematically, this could be treated as an advective process.

In this case, the mass transfer rate in our governing equations would still be represented in GoldSim as QC, where Q is the Solid “flow rate” and C is the concentration of the species in the Solid. However, the dimensions of Q would be mass Solid/time rather than volume water/time, and the dimensions of the concentration would be mass species/mass Solid.

There are actually two different ways that Solids could potentially transport mass due to advection in GoldSim. First, the Solid itself could be moved in bulk from one location to the other.  This could happen, for example, if a contaminated hillslope or cliff failed (i.e., a landslide) due to erosion processes, contaminated sediments were intermittently moved (during high flow events) in a stream, you were pumping a slurry of contaminated Solids from one location to another, or contaminated soils were physically moved from depth to the ground surface by burrowing animals.

The second way that Solids could potentially transport mass due to advection in GoldSim is if Solids were (continuously) suspended in water and the water itself was flowing (and hence carrying the Solids, as well as any dissolved species). In this Lesson, we will discuss modeling the bulk movement (advection) of a Solid.  In the next Lesson, we will discuss the transport of suspended particulate Solids in flowing water.

Of course, these two ways of transporting mass via advection of Solids do overlap conceptually to some extent. For example, in many cases, eroding Solids may indeed be carried by water (or wind).  In other cases, however, the action of the water may not actually move the Solid, but simply lead to its movement (e.g., by changing the stability of a slope).  But typically, when you are evaluating such a process, it will be obvious whether it is more appropriate to model it as a bulk movement of a Solid or as advection of a suspended particulate in water. For example, if the Solids were only intermittently being moved through a stream or an eroding hillside (e.g., during infrequent high flow events) it would likely be more appropriate to treat this kind of movement as bulk advection of the Solid rather than movement of a suspended particulate in flowing water.

To illustrate how we could model Solid advection, we will explore a simple example model. This example models erosion of a hillside (in a simple way).  A schematic of the system is as follows: 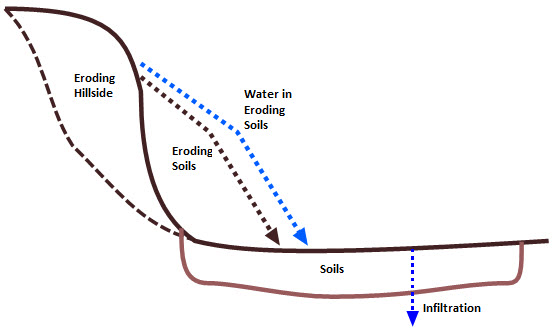 This model, named ExampleCT14_Erosion.gsm, can be found in the “Examples” subfolder of the “Contaminant Transport Course” folder. Open it now. This model is large compared to our other examples (nearly 50 elements).  It provides a good opportunity to revisit  a number of the things we have discussed in previous Lessons. We won’t go through and examine all of the elements in detail, but you are encouraged to do so.  The model looks like this: 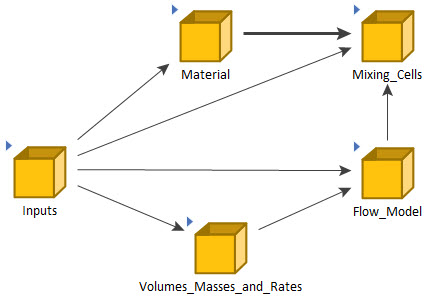 The Material Container, as has always been the case, has the Species element, as well as the Reference Fluid (Water) and the Solid that makes up the hillside and the area below it (Soil). You will see that there are three species (A, B and C).  Solubilities are assigned to Water and Partition Coefficients are assigned to Soil. The Inputs Container has all of the key inputs (as Data elements) for the model. You should browse through these (hold your cursor over each one to see the value and description). Three things should be noted: 1) the same amount of each species is initially present in the hillside; 2) only A is assigned a solubility (the other two species are infinitely soluble); and 3) only B is assigned a partition coefficient (the other two species do not partition onto Soil).

The Volumes_Masses_and_Rates Container computes the initial masses and volumes and the erosion rates: 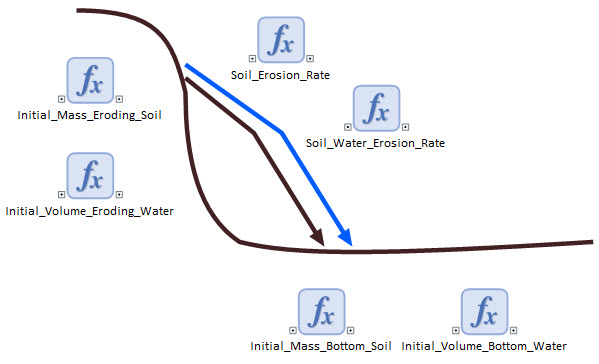 This system is modeled using three Cells (in the Mixing_Cell Container): 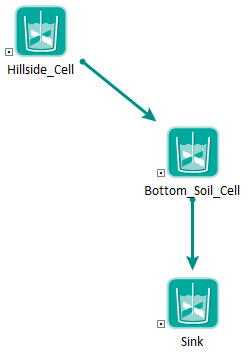 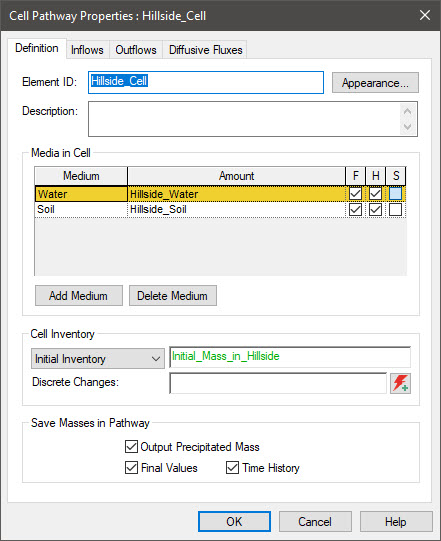 The Hillside_Cell has two Outflows (Soil and Water) to represent the erosion: 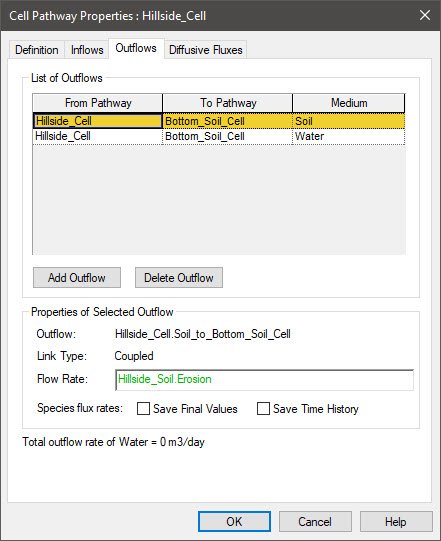 The Bottom_Soil_Cell has just a single Outflow to represent the flushing of water through the Soil due to infiltration (Soil does not leave the Cell): 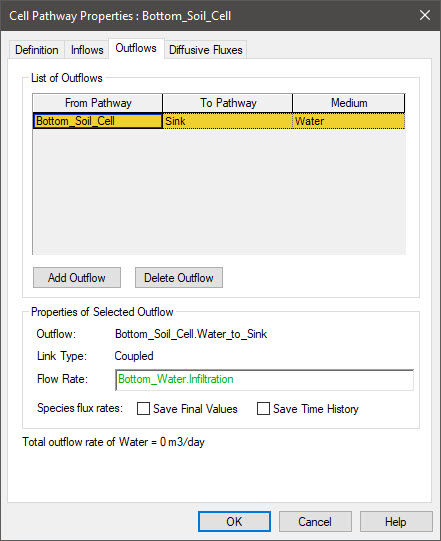 Note that the amount of Water and Soil in the Hillside_Cell and Bottom_Soil_Cell do not stay constant.  They decrease in the former (due to erosion) and increase in the latter. To model this, we need a flow model for the system.  This can be seen in the Flow_Model Container: 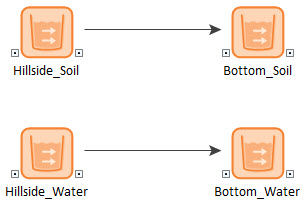 The outputs from these elements are used as inputs to the Cells (i.e., volumes, masses and outflows).

Run the model now.  The Results Container assembles a number of result charts.  We will just examine a few here (you should look at all of them).  First, let’s look at the Water and Soil Result element (which plots the amount of Water and Soil in the hillside and at the bottom: 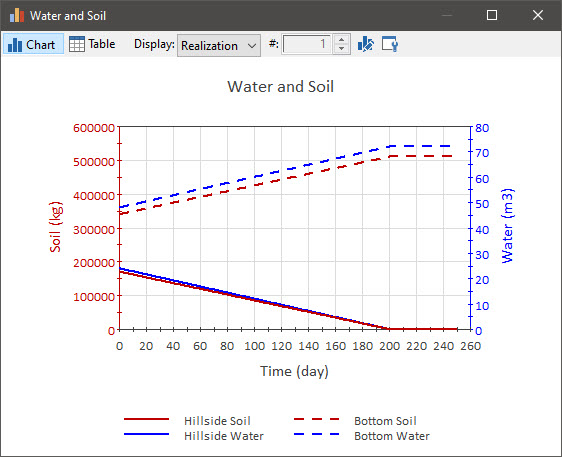 As can be seen, the amount of Soil and Water decreases (and actually goes essentially to zero  - a very small Lower Bound is specified to prevent the amount actually going to zero - when all of the readily erodible hillside erodes), while the soil at the bottom of the hillside increases accordingly.

Now let’s look at the Mass in Hillside: 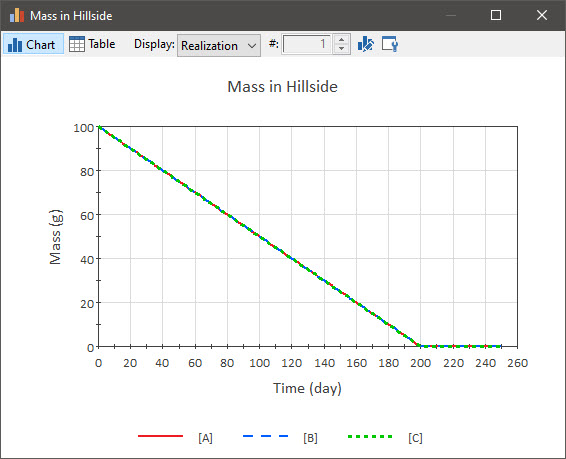 Note that there is a small amount of mass left in the Cell (due to the specified Lower Bounds), but the amount is quite small (less than a 1 mg of the original 100 g for each species).

As can be seen, all three species decrease at exactly the same rate (whether they are sorbed, precipitated or dissolved) since both the Soil and the associated Water are being moved together.

The Mass in Bottom Soils, however, shows a different pattern: 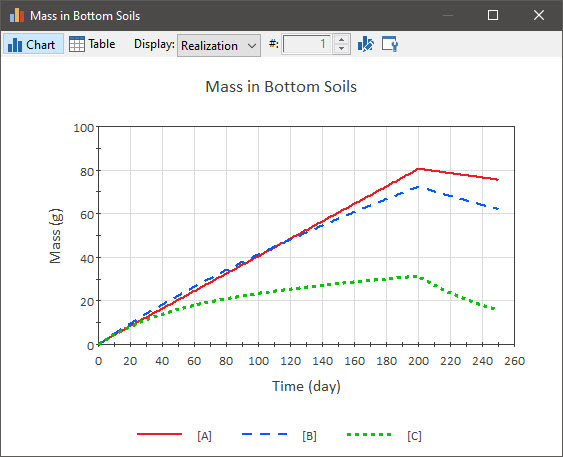 C has the lowest concentration, while the other two concentrations are higher.  This is because C is only in the Water (it does not precipitate or sorb), and hence flushes from the soil faster via infiltration.  The other two species either precipitate or sorb onto the Soil, and hence flush slower. You can look at the Concentration Bottom Water and Mass Flushed from System Result elements to better understand why this is the case. In fact, you are encouraged to look closely at all of the Result elements to make sure you understand these results.

Finally, before leaving this Lesson, let’s briefly discuss how we created the advective mass flux links involving a Solid (from the Hillside_Cell to the Bottom_Soil_Cell).  As we first discussed in Unit 6, Lesson 2, when you have created an Outflow from one Cell to another in previous Exercises and Examples, you would have been presented with this dialog:

In the past, we just accepted the defaults (“Water” for the Medium and “Coupled” for the Link Type).  We discussed the Link Type in Unit 6, Lesson 11 but have still never changed it.  We can again ignore this for now, but will revisit this later in this Unit. Let’s focus now on the Medium field.  This is where we specify the medium that is flowing.  In the past, we have always accepted the default (“Water”), because that is what has been flowing.  But in order to make an advective link involving a Solid (or another Fluid), we need to click on the field to view the drop-list.  In this model, we would see this:

When creating an Outflow between Cells, this list will first display all of the media that are present in both Cells, followed by three additional options at the bottom (that are used to create some specialized mass flux links that we will discuss later in this Unit). In this model, to model advection via Soil, we selected “Soil” from this list. After doing so, the required dimensions for the resulting Flow Rate became mass/time (rather than volume/time).

Note: Other than the Reference Fluid, only media that are present in both Cells are displayed in the list, so to create an outflow of a Solid (or a Fluid other than Water) from one Cell to another, that medium must exist in both Cells.