In the previous Lesson we discussed diffusive boundary layers.  In this Lesson we are going to work through an Exercise that models the transport of contaminants across the air-water interface (with a boundary layer on each side).

The manner in which volatile chemicals exchange across the air-water interface has been studied extensively over the years.  For industrial solvents and liquid fuels it can be one of the most important mechanisms for removal of the contaminant from surface waters.  And exchange of gasses into water is also of great importance.  Such exchange can have both positive effects (e.g., the exchange of oxygen into aquatic systems that results in reaeration) or detrimental effects (the dissolution of carbon dioxide into oceans, hence increasing their acidity).

One of the most commonly used models to explain the kinetics of the air-water exchange process (particularly in ponds or lakes) is the thin film (or stagnant layer) model. Conceptually, this model looks like this: 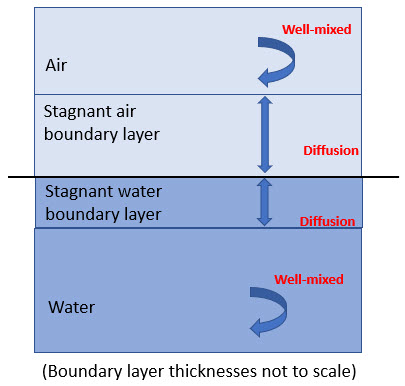 At the interface of the two boundary layers, the chemical volatilizes (from being dissolved in water to being present as a gas in air).  At the interface, the ratio of the concentrations in air and water is controlled by the Henry’s Law coefficient, defined here using GoldSim’s convention for partition coefficients:

Note: The Henry’s Law coefficient can also be defined in terms of the vapor pressure of the substance in air rather than the concentration in air, in which case it is not dimensionless. In GoldSim, however, H must be expressed as a dimensionless ratio of concentrations.

In this Exercise we are going to simulate this process.

Note: Although the boundary layer thickness for air is 1 to 2 orders of magnitude greater than that of water, since the diffusivity of chemicals in air is on the order of 4 orders of magnitude greater than in water, as a general rule, unless the Henry’s Law coefficient is relatively small (i.e., the species is not very volatile), the water boundary will control the rate (i.e., the relative resistance of the air boundary will be negligible). In this Exercise, the Henry’s Law coefficients are such that the water boundary does indeed control the release. 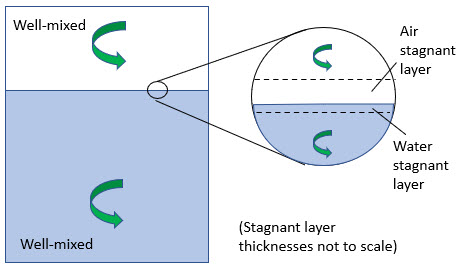 Two contaminants (X and Y) are introduced into the water.  Both are volatile.  X is fully dissolved in the water.  Y, however, has a lower solubility, and the insoluble portion is assumed to be suspended as small globules in the water. We are interested in simulating the volatilization of the contaminants from water to air.  The system is closed, which means that the contaminants will not leave the tank, but instead will reach some steady-state concentration in the water and air phase (which, as we shall see, is controlled by the Henry’s Law coefficient).

To create this model, you should follow these steps:

If, and only if, you get stuck, open and look at the worked out Exercise (ExerciseCT11_Air_Water_Diffusion.gsm in the “Exercises” subfolder) to help you finish the model.

Let’s focus on the two Cells. The air side Cell should look like this: 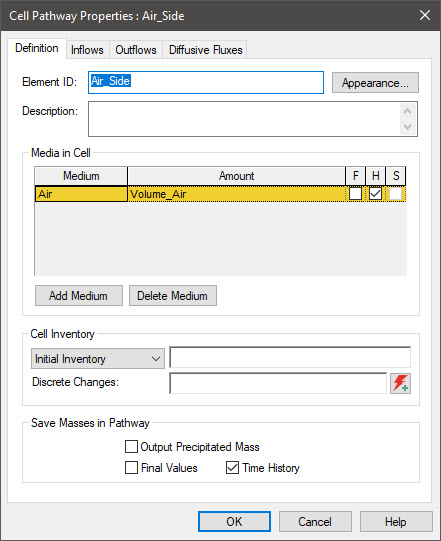 It contains only Air and has no Initial Inventory. 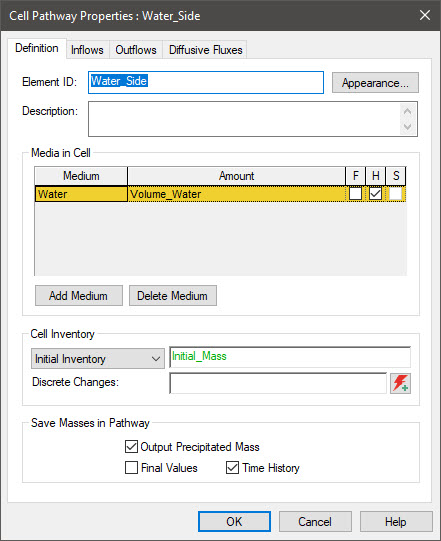 It contains only Water and has an Initial Inventory specified.

If we run the model and plot the concentration of the species in the water Cell, the result looks like this: 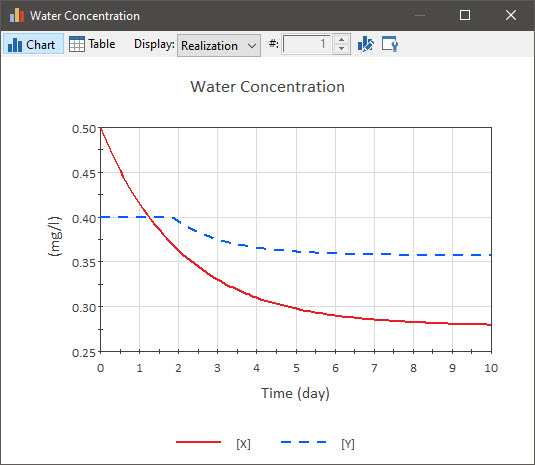 By 10 days, X is almost at a steady state concentration.  Y behaves a bit differently than X, because initially there is so much mass present it is at the solubility limit. As mass diffuses into the air, however, it eventually drops below the solubility limit (at about 2 days)

The concentration of the species in the air Cell looks like this: 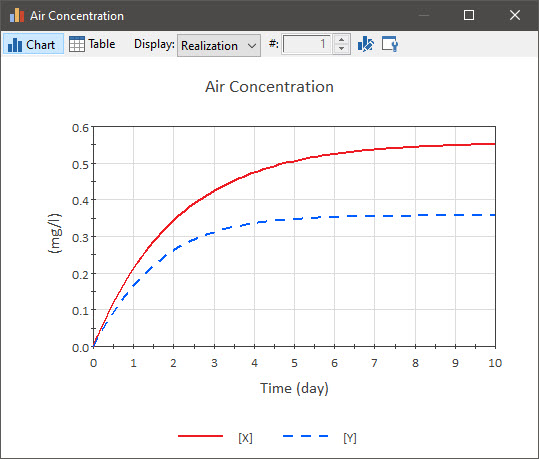 If you compare the water and air concentrations at the end of the simulation, you will see that the ratios are equal to the respective Henry’s Law coefficients (this is not exactly true for X as it is not quite at steady state).  This can be seen more clearly if we focus on just the Y results.  This plot shows the air and water concentration of Y, as well as the amount of Y that is precipitated (insoluble) in the water Cell: 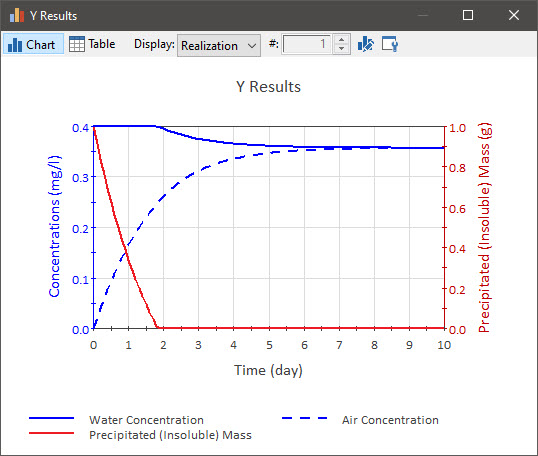 (See if you can create this result plot on your own.  It will be good practice for manipulating result charts).

It is clear here that the concentration in water is constant until all of the precipitated mass has dissolved.  Note also that the air and water concentrations are equal at steady state (since the Henry’s Law coefficient for Y is 1).

Note that if we swept the air from the air side Cell constantly (in this model you could simulate this by creating an advective mass flux link to a Sink from the air side Cell with a high flow rate), we would see that the water concentration would continue to decrease until all of the contaminants had diffused into the air (and been swept away). This, of course, is what we would do if we were simulating the volatilization of a chemical from a pond or a lake.

Finally, it is worth noting that in this model we assumed that the insoluble Y was suspended as globules in the water. If we assumed that it was much lighter than water (and hence floated on the surface) or heavier than water (and sat on the bottom), we would need to model this system a bit differently (by adding a Cell to represent the insoluble fluid whose volume changes with time).  It would be a good exercise to conceptualize how you might model such a system!