A single diffusive mass flux link between two pathways mathematically represents a one-dimensional diffusive process.  In the two examples we have examined so far in this Unit (a tube and a sediment layer), we modeled linear systems. However, by appropriately defining the size, diffusive areas and diffusive lengths, you could represent other one-dimensional geometries.

One type of one-dimensional geometry that is often represented in GoldSim is cylindrical.  This is because for radioactive waste management applications, waste packages are often cylindrical in shape.  They are then disposed in a vertical borehole (at the bottom of a mined drift) or horizontally in the drift itself. The borehole or drift is then filled with a diffusive barrier (such as bentonite). The objective is to then model the diffusion from the waste package through this diffusive barrier. In reality, this is actually a multi-dimensional system (due to the top and bottom of the cylinder), but it can often be treated as a one-dimensional system (e.g., by ignoring the tops and bottom for cylinders lying horizontally in a drift, or by simulating the top and bottom as one-dimensional linear systems for cylinders vertically placed in boreholes).

To illustrate this, we will walk through an Example that simulates diffusion from a cylinder disposed in a borehole.  The system we will simulate looks like this (in elevation view): 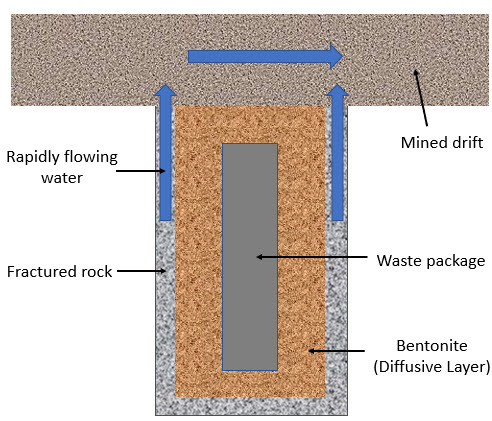 The cylinder is surrounded by bentonite within the borehole. To simplify the system, the rock surrounding the borehole is highly fractured and is assumed to have water rapidly flowing through it into the overlying drift, which also has water rapidly flowing through it. Again, for simplicity we will not actually model the impact of the waste package itself.  We will just assume that an initial mass of contaminants is present at the edge of the cylinder and available for transport through the diffusive barrier.

From the top of the borehole looking down (plan view), the system looks like this: 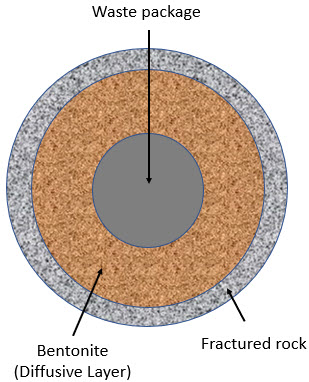 To simulate this system we will do the following:

We can think of the 5 Cells representing the top/bottom of the cylinder as 5 layers (similar to how we modeled the sediment layer in the previous Lessons. But the 5 Cells representing the region around the cylinder are conceptually very different. We can conceptually think of them as concentric cylindrical “shells”.  From the top of the borehole, they look like this: 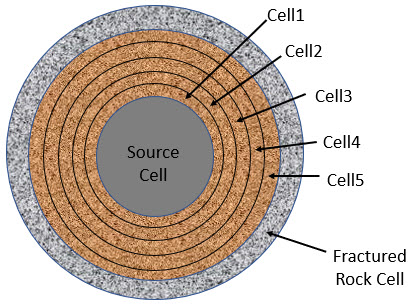 We will define the Cells so that they all have the same thickness, equal to 1/5 of the total thickness. If the radius of the waste package is R0, then we can compute the radii to the inner and outer edge of any Cell in terms of R0 and the bentonite thickness.

Since the Cells all have the same thickness, we also know that the diffusive length from the middle of any Cell to the edge of the Cell is equal to 1/10th of total bentonite thickness.

This provides all the information we need to represent diffusion horizontally assuming cylindrical geometry. By also representing the linear diffusion up and down from the cylinder ends we can simulate the entire diffusive system. 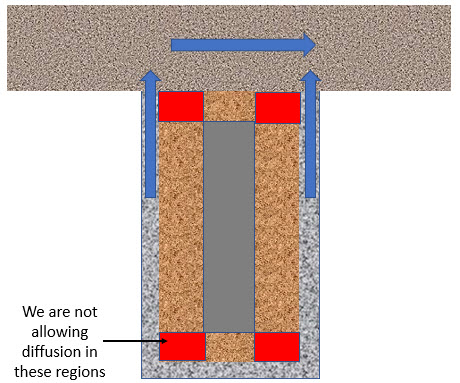 We could actually remedy this by adding more Cells to represent the red region. However, for this model, we will not bother to do so.  In any case, given the dimensions of the cylinder, by ignoring this, the error will be small and conservative (i.e., by ignoring this, mass will move through the bentonite faster, as we are essentially ignoring part of the bentonite). We could also add regions inside the waste package itself in order to model diffusion within the waste, but again, this is intentionally a simple model.

The various inputs for the model are as follows:

Let’s open this model now to see how this has been programmed. Go to the “Examples” subfolder of the “Contaminant Transport Course” folder you should have downloaded and unzipped to your Desktop, and open a model file named ExampleCT22_Cylindrical_Diffusion.gsm.

The various inputs have all been defined in the Inputs Container, and the Species, Water and Sand can be found in the Material Container. Let’s first take a look at the Geometry Container:

In this Container we are computing the volumes and diffusive areas for the various Cells that we will use to create the diffusive mass transfer links. These calculations are trivial for the Cells representing the bentonite above and below the package (since the volume and diffusive areas are identical for all Cells due to the linear geometry). It is more complicated, however, for the Cells representing the bentonite surrounding the package on the side (since the volumes and diffusive areas differ for each Cell due to the cylindrical geometry). Nevertheless, the calculations are straightforward.  You are encouraged to examine these Expressions to see how the various parameters are defined.

The Cell Container is where all of the Cells are located: 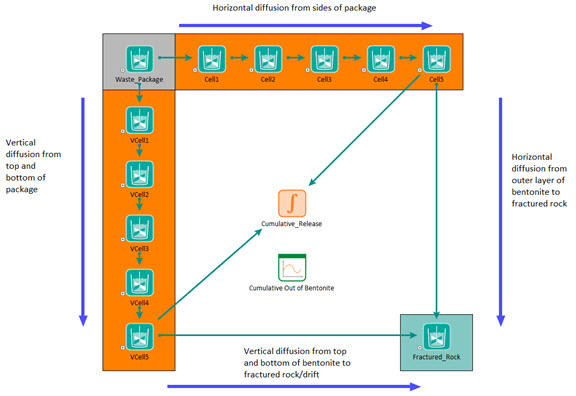 The waste package is represented by a single Cell, as is the fractured rock into which the contaminants diffuse when they leave the bentonite. There are five Cells representing the cylindrical shells of bentonite through which mass diffuses horizontally, and five Cells representing the layers above and below the top and bottom of the package (rather than representing these separately, they are combined by doubling the appropriate parameters). You are encouraged to examine these Cells to see how their properties and diffusive mass flux links are defined.

Run the model and click the “Cumulative Out Of Bentonite” Time History Result element. This plots the cumulative amount of mass that has left the bentonite: 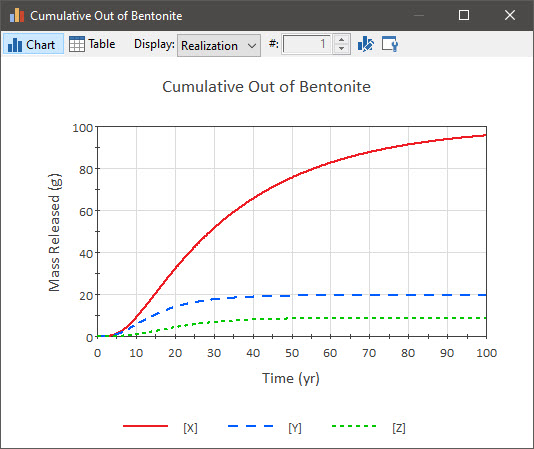 Recall that we modeled three species: X does not decay and is not sorbed, Y decays, but is not sorbed, and Z decays and is sorbed.  As can be seen, for the two species that decay, the diffusive barrier acts to delay release long enough so that much of the contaminant decays away before it can diffuse out.  This impact is greater for Z, which further slows release via sorption and retardation.  Note that the sorption is not particularly high (the retardation factor is approximately 2).  In many systems, the partition coefficients for some contaminants to a barrier such as bentonite could be much higher, having a very substantial impact on release rates.

Note that in this Lesson we have simply considered an alternative one-dimensional geometry (cylindrical instead of linear).  However, if necessary, you could also create a grid of Cells to create a higher geometry system.  For example, if we added some Cells to the ‘red” zones of the bentonite mentioned earlier (that we are currently ignoring) we could easily represent these regions (and this would effectively represent the full dimensionality of the system.