The Exercise that we worked through in the last Lesson was actually fairly realistic. That is, diffusive engineered barriers (in the form or caps, covers or surrounding material) are often used to control the release of contaminants.  This can be seen for systems like the one we considered in the previous Lesson (covering contaminated materials at the bottom of a water body) or for controlling the release of chemicals from soils or other materials near the ground surface. For radioactive waste management applications, a diffusive barrier (e.g., of bentonite surrounding waste containers) often acts a major component of engineered barrier systems designed to slow the release of radionuclides for disposed containers.

Moreover, in most situations, engineered diffusive barriers do not just depend on the porous medium slowing the diffusion process physically.  They also often involve use of porous media that act to slow the diffusion process chemically (due to partitioning).  That is, they sorb the contaminants as they diffuse through the material.  This can have a very significant impact on the performance of the diffusive barrier.

To understand conceptually why this is the case, recall from Unit 3, Lesson 5 that by assuming equilibrium partitioning with a single solid, we can express the concentration of a species in water within a porous medium in some fixed volume (e.g., a well-mixed Cell) as:

To get an idea of the effect of the diffusive conductance and partitioning on diffusion through a porous medium, let’s first revisit the tube example we explored in Lesson 5. Go to the “Examples” subfolder of the “Contaminant Transport Course” folder you should have downloaded and unzipped to your Desktop, and open a model file named ExampleCT20_Diffusive_Tube_Retardation.gsm.

This model is identical to the diffusive tube model we looked at previously with the following changes:

You are encouraged to browse the model to understand these changes. Run the model and go to the Tube Container.  Let’s first look at the concentration of the three species in the last Cell (Cell10).  There is a Time History Result element named “Concentration 10” set up to look at this: 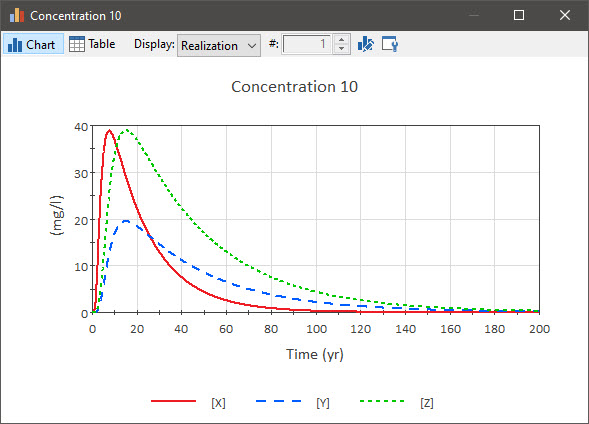 X represents the species with the original diffusion coefficient (and no partitioning).  What we are interested in evaluating is how adding sorption (Y) or decreasing the diffusive conductance (Z) changes the behavior. What we see is that in both cases, the time it takes the mass to diffuse out of the system is longer.  In fact, we can quantify the degree to which the rate of diffusion has been reduced.  First, let’s look at when the peak concentration occurs.  We could do this by just looking at the chart.  But we can also set up an Extrema element that records the time of the peak value.  That has been done in this model, and the result is displayed (in table form) in the Array Result element named “Time of Peak”: 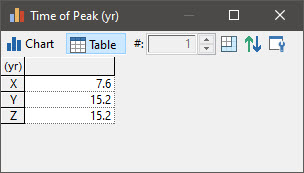 As can be seen, the peaks of Y and Z and delayed by exactly a factor of two.

Another way to quantify the delay is to look at when 50% of the mass has diffused through the column.  The “Cumulative Release” Time History Result element displays this: 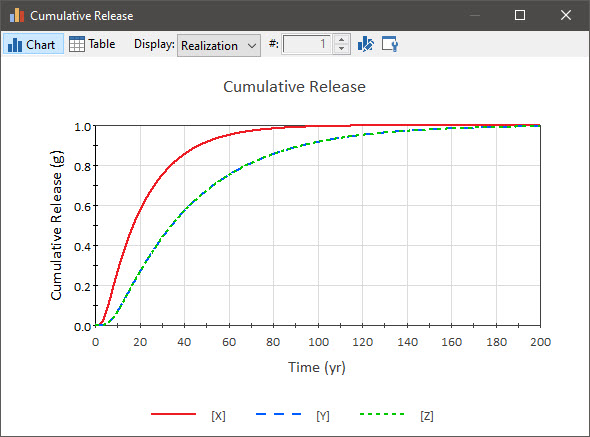 If you go to a table view and look for the point at which the value is equal to 0.5 g, you will find that X reaches this value at between 17.1 years and 17.2 years, and Y and Z reach this value at 34.3 yrs (exactly twice the time).

It is not surprising that Z moved two times slower through the tube (since we reduced its diffusive conductance - by changing the diffusion coefficient - by a factor of two).  But why did Y move exactly two times slower?  It did so because the partition coefficient was selected to produce this result. The delay or slowing of a species due to partitioning can be quantified in terms of a retardation factor:

The retardation factor is most commonly used when discussing advective-dispersive transport (and we will do so in the next Unit), but it can also be applied for diffusive transport. In this example, if you substitute the various values into this equation you will find it has value of 2. 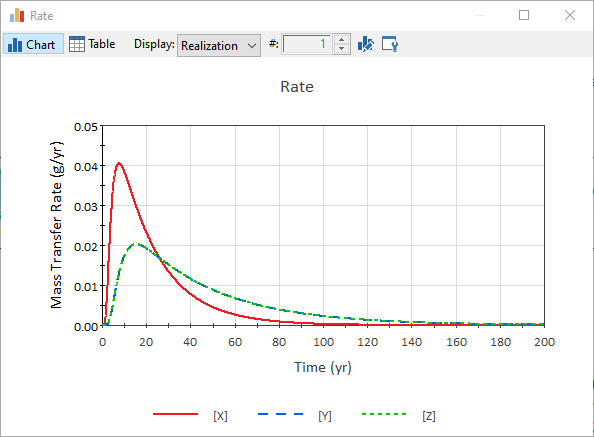 In this example, these two mechanisms produced the same diffusive mass transfer rate out of the system, but that is not always the case.  To see this, let’s now first revisit the sediment example we explored in the previous Lesson. Go to the “Examples” subfolder of the “Contaminant Transport Course” folder you should have downloaded and unzipped to your Desktop, and open a model file named ExampleCT21_Sediment_Diffusion_Kd.gsm.

This model is identical to the diffusive sediment model that you built with the following changes (similar to the changes we made for the tube model):

You are encouraged to browse the model to understand these changes. Note that this partition coefficient was selected to result in a retardation factor for Y of 2.

It is important to recall that conceptually this model is very different from the tube model. In the tube model a slug of mass diffused through the system (and eventually all mass diffused out of the system). In this model, we are assuming an effectively “infinite source”, such that the system reaches some steady state. As such, there is always mass in the pond (it is never completely flushed due to the infinite source).  In this model, our goal is twofold: 1) to reduce the steady state concentration; and 2) to delay the time to reach steady state (we will discuss why this can be critical shortly).

In this regard, this model is actually more representative of the type of problems you would likely need to model in the real world (having such an infinite source due, for example, to the slow dissolution of a large mass of waste, is not unusual). Moreover, you will see that because they act via different mechanisms, the effects of retardation and diffusive conductance on behavior are different than what we saw for the tube model.

Run the model and go to the Cells Container.  Let’s first look at the concentration of the three species in Sediment5 (the top layer of sediments closest to the pond water).  There is a Time History Result element named “Concentration in Sediment5” set up to look at this: 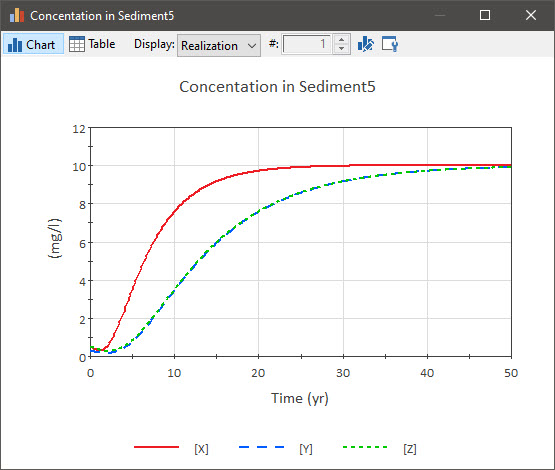 What we see here is that both Y and Z are delayed (they reach 50% breakthrough and steady state two times later than X).  But we find that all three steady state concentrations are identical.

So what is happening here? The mass transfer rate through the sediments (e.g., between any two sediment Cells) is equal to the (diffusive conductance) * (concentration difference).  The concentration difference between any two sediment Cells initially changes with time, but eventually reaches some steady state value.  And at steady state, for any two Cells, these differences must be nearly identical for all three cases. This is because the overall concentration gradient through the sediments is ultimately (at steady state) controlled by two end points: the contaminated layer, which is fixed at 100 mg/l, and the pond, which is flushed relatively rapidly, so that it has an insignificant value relative to the contaminated layer (as we will see, it differs for the three species, but is always much less than 100 mg/l).  As a result, the concentration at the top of the sediment layer must eventually be the same in all three cases, as the gradient across the sediments is eventually identical in all three cases.

Now let’s look at the concentration in the Pond (there is a Time History Result element named “Pond Concentration” set up to look at this): 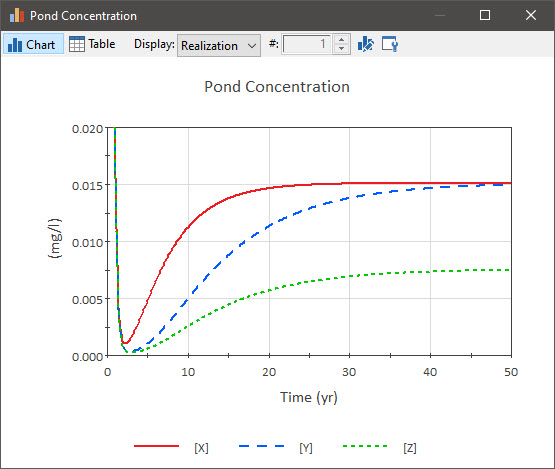 So for this type of model (in which we have an “infinite source” of a contaminant that must then diffuse through a diffusive barrier and into a low concentration region), we can conclude the following:

This, however, is for a species that does not decay. If a species decays (and does not ingrow), it could decay to a large extent before it has a chance to exit the diffusive barrier. In fact, for applications in which the contaminants are decaying (e.g., radioactive waste management applications), delaying the breakthrough via sorption may be one of the primary objectives of the diffusive barrier.