In the previous Lessons in this Unit we have been focusing on diffusive barriers (that perhaps may be engineered) that act to slow the release of contaminants from some source. And these indeed are important for many systems that you might want to simulate.

But this is not the only kind of system for which diffusion is important. The kinetics of many processes are often controlled by diffusion. You may recall that in Lesson 6 we considered a pond with sludge sitting on the bottom (that we then covered with sediments). Prior to adding the sediments, we noted that presumably the release rate from the sludge into the pond water was limited only by how fast the contaminant could dissolve into the water.  Such a rate is not infinite of course.  There would be some limits to how fast this can occur.  In some cases this might be chemically controlled (e.g., if the release rate was controlled by a chemical reaction). In many cases, however, the release rate may be controlled by how fast the contaminant can diffuse through some boundary layer. To understand this, let’s consider our sludge example again (before we add the sediments). Water in the pond is circulating (we assumed the pond was well-mixed), but this does not mean water is flowing directly by the sludge.  In reality, the system would look something like this: 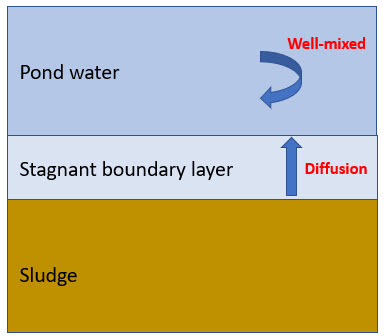 Although the pond itself is well-mixed (water is circulating), at the interface between the sludge and the pond water there is a boundary layer of water.  In this boundary layer, the water is stagnant (it is not moving).  In order for the contaminant to reach the moving pond water, it must diffuse through this boundary layer.  This diffusive process controls the release rate of mass into the pond.

Note: In reality, even if the release rate was controlled by a chemical reaction, this in turn may be limited by a diffusive process (e.g., perhaps a reactant such as oxygen would need to diffuse from the water column to the sludge layer).

Let’s look at an Example that models such a system.  Go to the “Examples” subfolder of the “Contaminant Transport Course” folder you should have downloaded and unzipped to your Desktop, and open a model file named ExampleCT23_Diffusive_Boundary_Layer.gsm.

This model is a simplified version of ExampleCT21_Sediment_Diffusion_Kd.gsm.  What we are modeling here is the pond immediately after the contaminated sludge was deposited on the bottom (and before we added any sediments).  We want to model what the steady state concentration in the pond resulting from the sludge releasing mass to the pond water, assuming the release rate is controlled by a boundary layer at the interface between the sludge and the water column.

In order to do this, we need to specify the thickness of this boundary layer.  In this model, we have assumed 1 mm (this is the kind of parameter that cannot be measured directly and would need to be inferred from experiments). To explore the sensitivity of the results to the diffusion coefficient, we will consider three species: X has the default diffusivity (1E-9 m2/s); Y has a diffusivity 10 times lower than X, and Z has a diffusivity 2 times lower than X.

As in the original model (with sediments), the various inputs have all been defined in the Inputs Container, and the Species, Water and Sand can be found in the Material Container. You can take a quick look at those if you wish.  They are much simplified (since the sediment does not exist in this model).

Let’s look at the Cells container to see how the system has been defined.  As can be seen, it is quite simple: 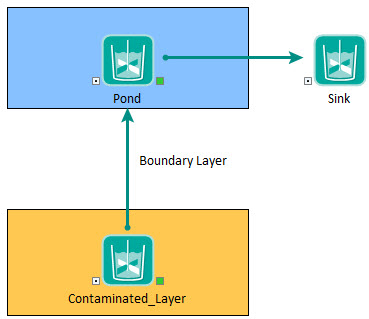 As you may recall from the sediments example, the contaminated sludge layer has a defined concentration.  The pond is flushed to the sink.

Open the Contaminated_Layer Cell and let’s look at the diffusive flux that has been defined: 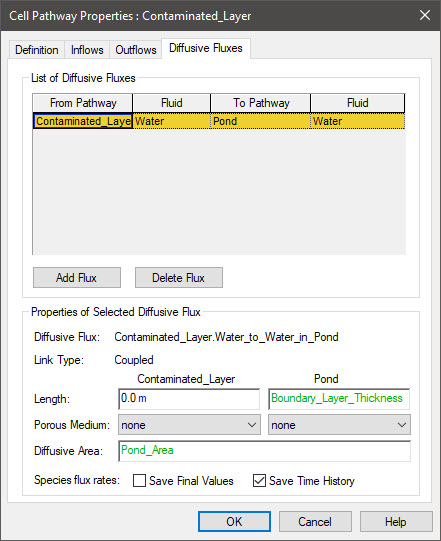 As can be seen, we are simulating a boundary layer on the water side of this link (we are assuming a zero diffusive length on the contaminated layer side).  The diffusive Length is the boundary layer thickness. The Diffusive Area is simply the entire area of the bottom of the pond.  No porous medium is involved (diffusion is just through the water in the boundary layer).

Close this dialog and run the model.  Then open the “Pond Concentration” Time History Result element: 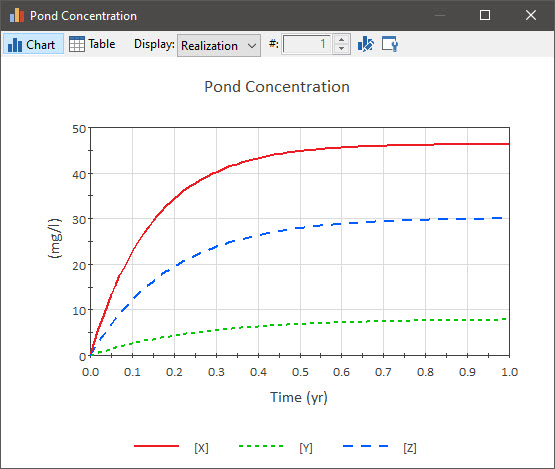 To simulate this, we would need to do the following:

Such a model would look very similar to the sediment example (with Cells representing the sludge itself rather than sediments).

Of course, a real system may have additional complexities. For example, the contaminant may be present in the sludge at such high levels that it is initially present at the solubility limit. In such a case, depending on the amount of contaminant present, it may take a very long time to exhaust the mass in a layer (the concentration would indeed be at a fixed concentration for a long time). It is also possible that the contaminant must undergo some kind of reaction in order to be released (e.g., it must be oxidized in order to become soluble). In this case, the controlling factor would be diffusion of a reactant (e.g., oxygen) into the contaminated layer from the water column.

The point here is that the source term for your models can be very complex. Rather than assigning a fixed concentration, you may need to consider that actual physical and chemical processes that are controlling the release rate (e.g., diffusion, solubility constraints). All of these things can readily be simulated by GoldSim. In fact, for models of radioactive waste disposal systems (in which the source is often highly engineered), great effort goes into modeling these release processes (and we will discuss this in more detail in Unit 11).

In the next Lesson, we will work through an Exercise that models the release rate of a dissolved (but volatile) contaminant from water to air that is controlled by both diffusion and solubility.