Before concluding our discussion on the simulation of diffusion, in this Lesson we will briefly discuss several dimensionless factors that can be used to modify the diffusive conductance under certain circumstances.  Although you may never need to do this, exploring these factors and understanding their impact on diffusion rates provides insight into the process of diffusion and hence is worth examining here.

There are four dimensionless factors that can be used to modify the diffusive conductance:

The second  factor that can be specified to adjust the diffusive conductance pertains only  when modeling diffusion through a porous medium.  As such, it is a property of the porous medium (i.e., the Solid).  If you open a Solid dialog, and press the Advanced Properties… button, the following dialog will be displayed:

We are interested in the Available Porosities field. This represents the fraction of the pore volume within the Solid that is accessible to each species.  It effectively allows you, for the purpose of mass transport calculation, to make the porosity of the porous medium a function of the species.

As we shall see below, the impact of specifying a fractional available porosity for a solid on mass transfer rates is complex:

In our discussions thus far in this Unit, we have been concerned with diffusion through a single fluid (typically within a porous medium).  However, diffusion becomes much more complicated when the porous medium is only partially saturated (and hence you have two Fluids: water and air). To address this complication, Fluids have another property that impacts the diffusivity.  The Diffusivity Reduction Formula allows you to define how the effective diffusivity through the fluid is impacted by the fluid’s saturation level within any Cell pathways in which it is present.  This input is available just below the Reference Diffusivity on the Fluid dialog.

Physically, this term is intended to be less than or equal to 1 (it defaults to 1).  If the porous medium through which diffusion is occurring is saturated, this should be left at its default value of 1.  But if the porous medium is only partially saturated, you should enter a formula here. When used, this formula is intended to directly reference the fluid’s saturation level using a special variable called “Saturation”.  It must be referenced as “~Saturation” in the equation entered into the field, such as in the example below:

The “Saturation” locally available property instructs GoldSim to internally compute the saturation of the fluid in the pathway (based on how you have defined the amounts of Fluids and Solids and their properties).

As we shall see below, like the Available Porosities, the impact of saturation on the diffusion rate is complex. While the Diffusivity Reduction Formula (when defined appropriately as a function of saturation) reduces the effective diffusivity, a lower saturation changes the volume of water available.  This in turn affects the concentration (and hence the concentration gradient).  Moreover, decreasing the volume of water available increases the retardation due to sorption (since all of the mass of the porous medium is still assumed to be available, but only a fraction of the water is).

It is worthwhile at this point to briefly look at an Example model to view the effects of these three dimensionless variables (Relative Diffusivity, Available Porosity and Diffusivity Reduction Formula) on diffusion rates. To do so, go to the “Examples” subfolder of the “Contaminant Transport Course” folder you should have downloaded and unzipped to your Desktop, and open a model file named ExampleCT24_Adjusting_Diffusive_Conductance.gsm.

This model is very similar to the tube example we explored in Lesson 5 in which we simulated the diffusion of species through a tube that was filled with a porous medium and saturated (ExampleCT19_Diffusive_Tube.gsm).  However, several minor changes have been made for the purposes of this comparing and contrasting the impacts of these dimensionless variables:

We won’t bother to explore the model here (although you are encouraged to do so) as the changes are straightforward.  Instead we will focus on the results. Run the model and open the “Release Rate” Time History Result element.  This shows the release rate out the end of the tube (recall that the boundary condition was zero concentration, similar to assuming diffusion into a rapidly flushed tank): 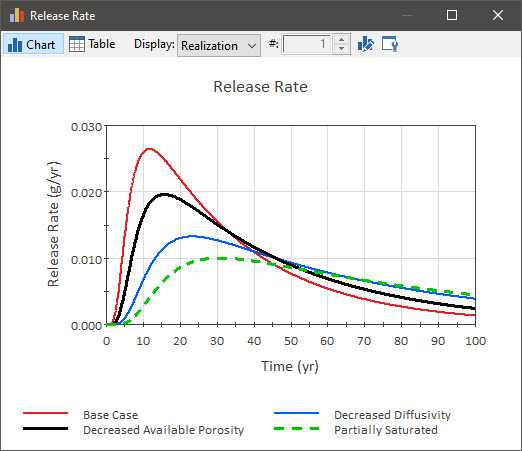 As can be seen, all three dimensionless variables slow the rate of diffusion, but in different ways:

This example (and the others presented in this Unit) should make it very clear that diffusion, while conceptually simple, can be a very complex process indeed!

Note: In the simple Example discussed here in which we had a single porous medium and a single fluid (i.e., we did not consider partitioning into and diffusion through the air phase), modeling diffusion through a partially saturated porous medium by using the Diffusivity Reduction Formula (if properly defined) can be appropriate.  But for more complex situations involving partially saturated porous media (e.g., considering air phase diffusion and/or multiple solids), such an approach likely would be inappropriate.  Fortunately, there are still ways to represent such systems, and this is discussed in detail here.

The final dimensionless variable we will briefly mention is the Relative Particulate Diffusivity. Like the Available Porosities, this a property of a Solid and can be found in the Advanced Properties dialog for a Solid:

The Relative Particulate Diffusivity is a dimensionless number between 0 and 1 (it defaults to 1). Similar to the relative diffusivity for a species, the relative diffusivity for a particulate Solid is multiplied by the Reference Diffusivity of the corresponding Fluid to determine the actual diffusivity of the particulate form of the Solid in the Fluid.  Typically, this value would be much smaller than 1. It often would not apply at all for porous media, as most suspended particles would be filtered out (unless they were very small, such as colloids) and hence you would not specify any suspended solids at all in the system.