Returning to the tube example discussed in the previous Lesson, to simulate diffusion, we will need to discretize the tube (e.g., by creating a number of Cell pathways that represent different “slices” of the tube), and then specify diffusive mass flux links between the Cells. We will use 10 “slices” (we will discuss the implications of this decision in the next Lesson).

In this Lesson, we will work through the process together of creating a diffusive mass flux link between just two Cells (i.e., the first two “slices”) of the tube through which we will simulate diffusion:

In the next Lesson, we will then look at a completed model with all 10 Cell pathways defined and explore its behavior.

Let’s open a model (that is partially built) and walk through the process of creating a diffusive mass flux link.  Go to the “Examples” subfolder of the “Contaminant Transport Course” folder you should have downloaded and unzipped to your Desktop, and open a model file named ExampleCT18_Diffusive_Tube_Intro.gsm.

What we are going to do is simulate a tube filled with sand that is saturated with water.  The tube is 1 m long and has a radius of 5 cm. We will assume one end of the tube is closed (no mass can move through that end) and 1 g of mass (of species X) is instantaneously injected at that end (uniformly over the entire area). The other end of the tube is connected (through a screen that holds the sand in the tube) to a small tank filled with water that is rapidly flushed (effectively maintaining the concentration in that tank at zero).  We then want to simulate the rate of diffusion of X out of the far end of the tube into the tank.

To do this, we have discretized the tube into 10 “slices” (as shown above). We also have a Cell representing the tank. We will create a diffusive mass flux link between Cell1 and Cell2:

Before we do that, however, let’s first take a look at Cell1: 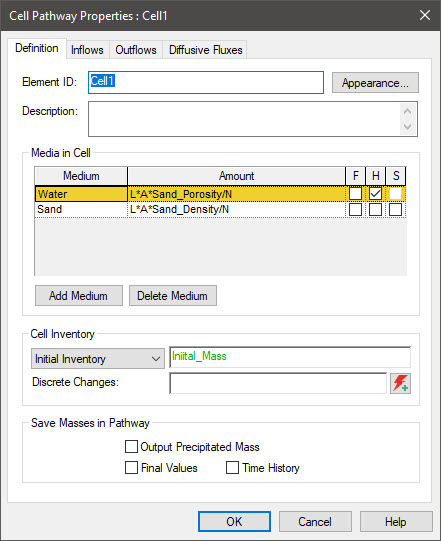 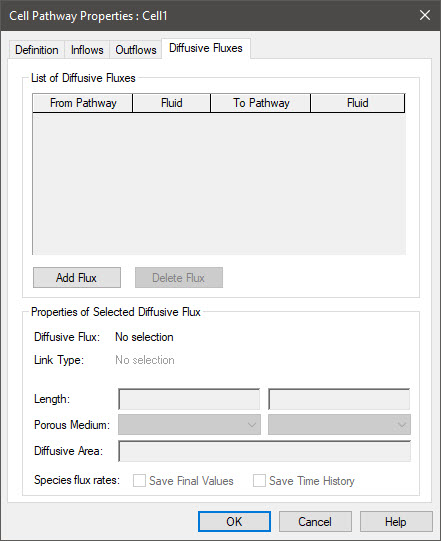 One property is a function of the fluid through which diffusion is occurring:

Two properties are functions of the porous medium (if any) through which the diffusion is occurring:

Two properties are a function of the geometry and discretization of the pathway:

So how do we specify all of this information? To understand this, let’s first discuss conceptually how GoldSim represents diffusion between two pathways. 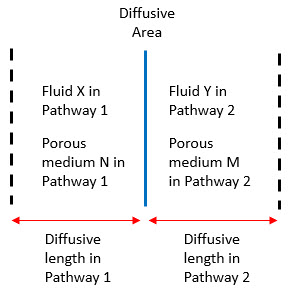 To create a diffusive mass flux link between two pathways in GoldSim, you must do the following:

These inputs, along with the properties of the fluids and porous media involved, determine the value of the diffusive conductance.

So let’s create a diffusive mass flux link between Cell1 and Cell2.  To do this, open Cell1, and select the Diffusive Fluxes tab.  Press the Add Flux button.  You will be prompted to select a pathway. Select Cell2 and press OK.  The following dialog will appear:

This dialog provides several inputs.  The first simply indicates that pathway to which you are connecting (you could change it by pressing the Select… button).  The second two indicate what Fluid is involved (it can be different for each Cell).  In this case, each Cell only contains one Fluid (Water), so it cannot be changed.

Finally, you can indicate the Link Type.  When connecting two Cells, this must be “Coupled” (and hence cannot be changed).

When you press OK, the Diffusive Fluxes tab will look like this: 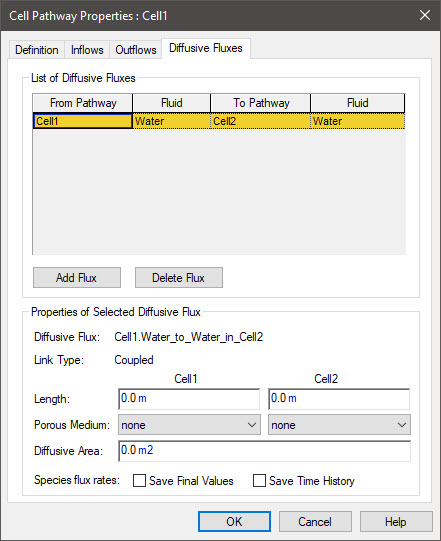 We now must specify the various inputs. It is best to start with a “from” Cell at one end of the row of Cells, and build connections towards the “to” end of the row. This establishes a “sign” for diffusion where it is considered positive in the from-to direction. Although diffusion can result in transport in either direction, having a consistent “sign” allows diffusive fluxes to be plotted consistently in a Result element.

In this particular case (a 1-D tube), the Length represents distance from the center of the Cell to the “edge” of the Cell.  Since the tube has a total length of L, the Length (for each side) should be L/(2*N), where N is the number of Cells (both L and N are already defined in the Inputs Container). Note that as a result, the total diffusive distance from Cell1 to Cell2 is L/N.

We are assuming diffusion through a porous medium, so for each side, the Porous Medium should be specified as “Sand”.

Finally, the Diffusive Area is simply the cross-sectional area of the tube (defined as A in the Inputs Container).  This assumes that the porous medium in question is fully saturated with respect to the fluid (Water, in this case).

When you are done, the Diffusive Fluxes tab should look like this: 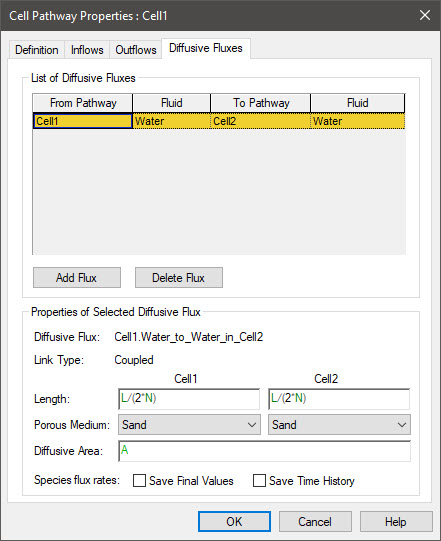 Press the OK button to close the dialog.  Now open Cell2, and go to the Diffusive Fluxes tab: 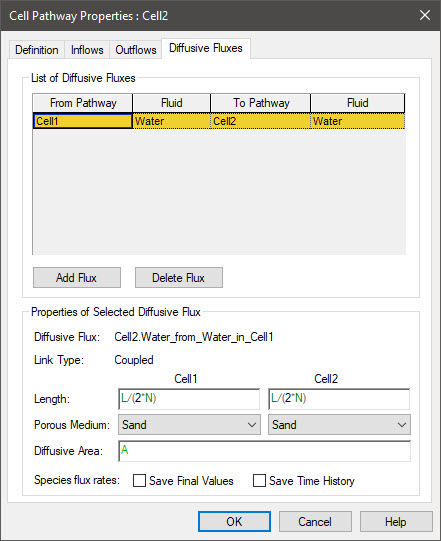 We see that the diffusive flux link appears in both Cells (and can be edited from either location).  This is analogous to an advective Outflow from one Cell appearing as an Inflow to the downstream Cell.

The diffusion coefficients for Water are specified in the Reference Fluid dialog, so let’s briefly revisit that.  If you open the Water element (inside the Material Container), you will recall that it looks like this: 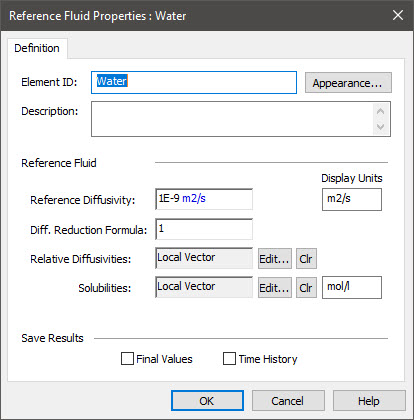 There is another field here (Diff. Reduction Formula) that also affects the diffusivity (if changed from its default value of 1).  It is used to adjust for diffusion through porous media that are only partially saturated. We will discuss this in Lesson 11.

The porosity and tortuosity for the porous medium are specified in the Solid dialog, so let’s briefly revisit that.  If you open the Sand element (inside the Material Container), you will recall that it looks like this: 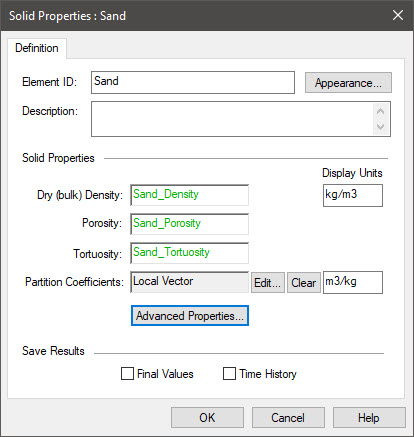 The Porosity and Tortuosity are specified directly here.  The meaning of the Porosity of a Solid needs no further discussion, but the Tortuosity does.

As we will discuss in Lesson 11, the Advanced Properties for a Solid also have several inputs that can affect diffusion (if changed from their default values).

Note: The equation for the diffusive conductance presented above has several additional terms that appear when modeling complex diffusion problems (e.g., partially saturated porous media, species-specific porosity adjustment factors). These are dimensionless factors that default to 1 (and hence they do not appear in the equation or have any impact unless they are modified).  We will discuss these in Lesson 11.

Before we leave this Lesson, there are two additional points regarding diffusive mass flux links that should be noted:

In the next Lesson we will examine this model again, but this time with all of the mass flux links already created so that we can explore its behavior.