Now that you are comfortable in creating diffusive mass flux links, in this Lesson we are going to work through an Exercise where you will (partially) build a model on your own. This model will also be a bit more realistic than our simple tube example that we looked at in the previous Lesson.

The system we will consider is illustrated schematically below:

This is a pond that has been used for disposal of a dense sludge containing the chemical X. The sludge sits at the bottom of the pond.  There is a very large quantity of X in the sludge such that the water concentration at the bottom of the pond (directly in contact with the contaminated sludge) is essentially constant (fixed at the solubility limit of X).  The pond itself is constantly flushed with water (and is assumed to be constantly well-mixed), but because the sludge provides a constant (and effectively infinite) source of X, the concentration in the pond is currently at a constant high level and we wish to reduce this.

We assume we cannot remove the sludge, so it will continue to release X into the pond indefinitely. Currently, the release rate from the sludge into the pond water is limited only by how fast X can dissolve into the water.  This rate is not infinite of course.  There are physical/chemical limits to how fast this can occur.  And, in fact, this rate is important because the steady state concentration in the pond is actually determined by the combination of the dissolution rate of X and the flushing rate of the pond.  We will address how such a dissolution rate could potentially be computed later in this Unit (in Lesson 9).  For now, however, we do not need to model this dissolution rate explicitly (since we will be modeling a diffusive barrier that intentionally reduces the release rate beyond what the dissolution process itself can provide).  Instead, we will simply assume that the system has reached at steady state so that the pond is initially at a constant concentration.

To reduce the concentration in the pond, we will create a diffusive barrier by covering the sludge at the bottom of the pond with a thick layer of sediment.  This will not prevent X from entering the pond water, but it will slow the rate at which this occurs by forcing X to diffuse through the sediment layer to reach the pond water. By doing so we will reach a new (lower) steady state concentration in the pond.  This concentration will be controlled by the steady-state diffusion rate through the sediments (which is much slower than the dissolution rate of X).

The purpose of our model is to compute 1) how the pond concentration will change after we add the sediments; and 2) the new steady state concentration (and the point when it will be reached).

For simplicity, the pond volume is assumed to be constant over time (inflow and outflow approximately match) and the flow rate though the pond is constant (in reality, of course, the flow and volume would be seasonal). Note that the residence time (the time required to turn over all the water in the pond) is on the order of 100 days. With such residence time, if no other mass is added, mass in the pond should drop by a factor of 10 in a little over 200 days, and by a factor of 100 in just under 500 days.

Instead of building this entire model, it has already been partially built. Go to the “Exercises” subfolder of the “Contaminant Transport Course” folder you should have downloaded and unzipped to your Desktop, and open a model file named ExerciseCT10_Sediment_Diffusion.gsm.

The various inputs have all been defined in the Inputs Container, and the Species, Water and Sediment can be found in the Material Container. We will focus on the Cells Container, where all the Cells are located: 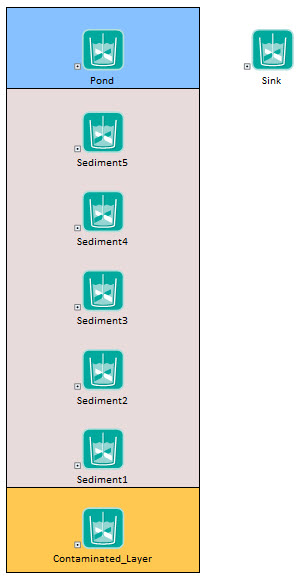 As can be seen, the sediment layer has been discretized into five Cells. There are additional Cells for the contaminated sludge layer, the pond and a sink (into which the pond flows).  The amount of media in each of the Cells, as well as any initial conditions have already been defined. The Contaminant_Layer Cell looks like this: 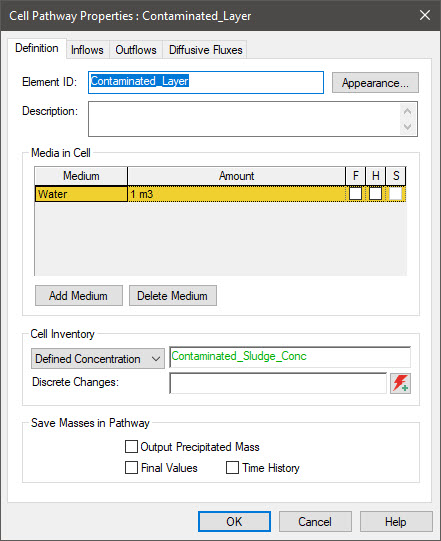 A Defined Concentration has been specified (and hence the volume of water is simply specified as an arbitrary number (it is not used).

The Pond is defined as follows: 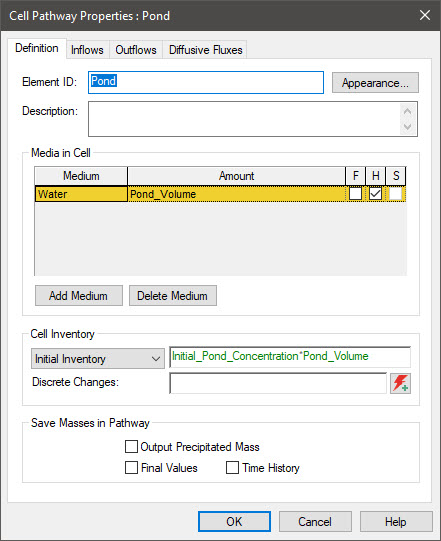 Note that an Initial Inventory is specified.

All five Sediment Cells are identical and look like this: 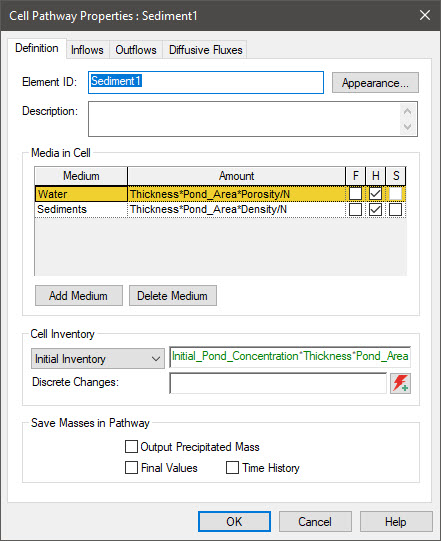 N is the number of Cells used to discretize the sediment layer (in this case, 5). Note that these Cells also have an Initial Inventory specified (equal to the initial pond concentration multiplied by the volume of water in the Cell: Initial_Pond_Concentration*Thickness*Pond_Area*Porosity/N), since when the sediment is added, the pore space will be filled with the contaminated pond water.

Stop now and complete the model.

Once you have done so, save it to the “MyModels” subfolder of the “Contaminant Transport Course” folder on your desktop (call it ExerciseCT10.gsm), as we will build upon this in a later Lesson. If, and only if, you get stuck, open and look at the worked out Exercise (ExerciseCT10_Sediment_Diffusion_Complete.gsm in the “Exercises” subfolder) to help you finish the model.

Let’s walk through the remainder of the model now.

First let’s look at the diffusive mass flux link from the Contaminated_Layer Cell to Sediment1.  It should look like this: 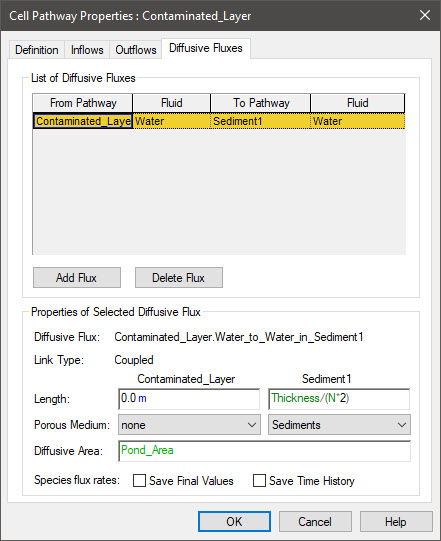 The diffusive mass flux links between the sediment Cells are all identical.  For example, here is the link from Sediment2 to Sediment3: 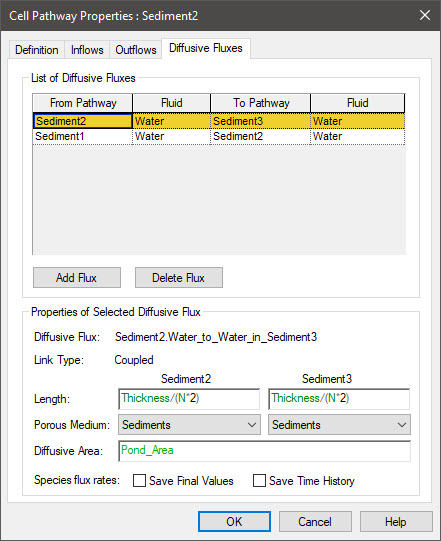 The diffusive mass flux link from Sediment5 to the Pond should look like this: 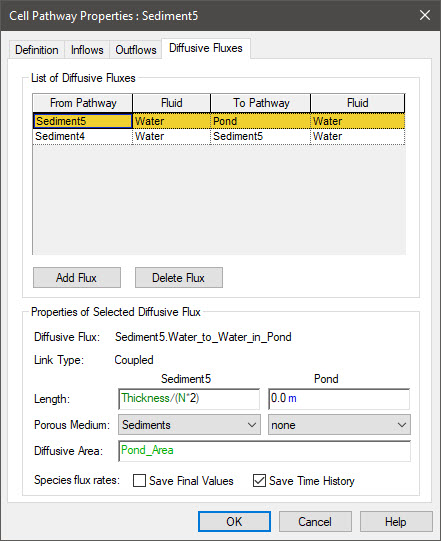 Note that as was the case for the Contaminated_Layer Cell, there is no diffusive length on the Pond side of the link (it is assumed that the well-mixed Pond concentration exists right up to the boundary between the pond water and the sediment).

Note: In reality, there would actually exist a small boundary layer on the Pond side of the link through which the contaminant would need to diffuse in order to reach the well-mixed water. However, in this case, we are assuming that this layer is very small (and has very little diffusive resistance) compared to the Sediment5 side of the link.  As a result, it can be ignored.  As we will discuss in Lesson 9, however, in some cases such boundary layers can be very important.

Finally, the advective mass flux link from the Pond to the Sink should look like this: 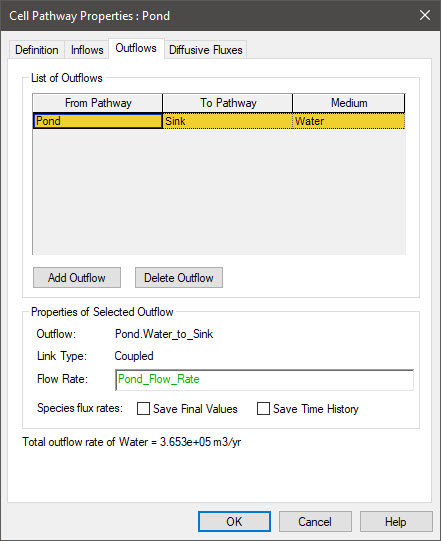 This model is set up to run for 40 yrs with a 0.1 yr timestep.  Run the model now, and double-click on the “Pond Concentration” Time History Result element (which has already been defined for you) to see how the Pond concentration changes with time: 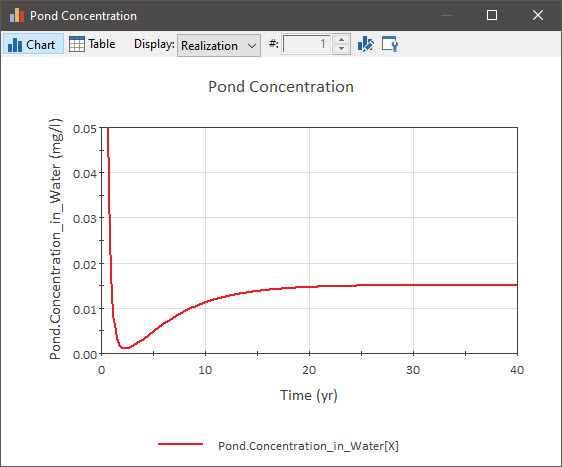