As has been pointed out in previous Lessons in this Unit, the concentration leaving an Aquifer or a Pipe is not often of great interest, as it represents a value at the end of one-dimensional conduit that is averaged over a (quite) arbitrary flow area.  In reality, of course, the concentration in a plume will vary spatially at the end of a flow path due to dispersion in the horizontal or vertical transverse direction and/or a source term that is not uniformly distributed across the area of the conduit being simulated.

Predicted concentrations at specific points in space will always be highly uncertain (due to the uncertainty and spatial variability in many of the input parameters controlling contaminant transport). Nevertheless, there may be some applications in which you wish to do so.

In order to compute such a value, GoldSim provides a special function that returns a correction factor that can be used to multiply the Aquifer’s or Pipe’s concentration output in order to compute the actual (as opposed to spatially-averaged) concentration at an observation point at some specific location at the end of the pathway. In particular, the Plume function (which is analogous to other GoldSim functions like sin or max) has eleven input arguments that describe the properties of the pathway to which you wish to apply the correction, the size of the source, the dispersive properties of the pathway, and the exact location of the observation point.  The source is assumed to be a point, rectangle or box centered on the midpoint of the flow path (the pathway), and the observation point is located at the end of the pathway some specified distance from the centerline.

The following diagram illustrates the various input arguments required by the Plume function: 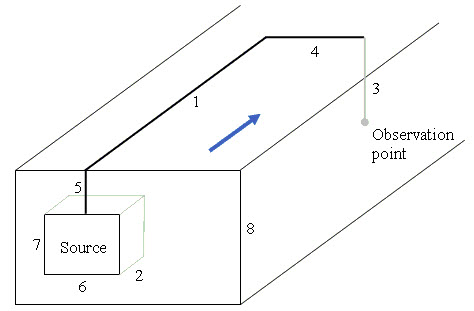 The arguments are as follows (the numbers reference lengths in the figure above):

Note that the Plume function appears in the function list accessible by right-clicking in an input field and selecting Functions from the context menu (it can be found in the “Contaminant Transport” category).  When you insert it, to assist in specifying the large number of inputs, GoldSim puts in temporary placeholders for the arguments (that you will of course need to replace with the actual input arguments):

When specifying these inputs, the following rules should be observed to ensure that the Plume function is physically consistent with the pathway concentrations to which you are applying it:

The arguments to the Plume function can be links or expressions, and the output of the Plume function is dimensionless. The arguments can also be arrays (vectors or matrices), in which case the output of the function is an array.  In such a case, not all of the arguments need to be arrays (arguments defined as scalars are applied to all items of the array).  However, all arguments that are defined as arrays must have the same array labels sets. (By using arrays, the plumes from several sources can be modeled using a single Expression).

Because you can specify the length, width and thickness of the source (and any of these can be zero), there is a great degree of flexibility in defining the dimensions of the source.  A source can be defined as:

The thickness of the aquifer is required because at a certain distance downgradient from the source, the vertical spread of the plume will encounter and reflect off the bottom.  It will also reflect off the top (and eventually the aquifer will be fully-mixed vertically if it is long enough).  GoldSim automatically accounts for these reflections.  Horizontal (transverse) dispersion is assumed to be unconstrained, however.

ExampleCT29_Plume_Function.gsm in the “Examples” subfolder of the “Contaminant Transport Course” folder you should have downloaded and unzipped to your Desktop provides an example of the use of the Plume function.  In this model, the Plume function has been added to Exercise 12.  Recall that the system for that Exercise schematically looks like this:

A square trench is dug into the ground (with a very shallow water table) and some waste is deposited below the water table (into a sandy aquifer).  The waste contains two contaminants (X and Y) that are present at fixed concentration effectively indefinitely (e.g., due to a solubility constraint). This forms a contaminant plume that flows along the water table.  Species X is sorbed onto the sand, but species Y is not sorbed at all. The entire plume eventually discharges to a stream and is quickly mixed across the width and depth of the stream.  For the purpose of this simple Exercise, we will assume that the flow rate through the aquifer (and in the stream) is constant.

The various input parameters of interest in the original model in this case are summarized below:

We will compute a concentration at the end of the pathway (just before it discharges to the stream) that is 5 m below the water table along the centerline of the plume.

Recall that the inputs required by the Plume function are as follows:

You will see that the equation to compute the point concentrations (of the two species) looks like this (it is inside the Contaminant_Transport Container):

If we run the model and double-click on the “Concentration Leaving Aquifer” Time History Result element, it looks like this: 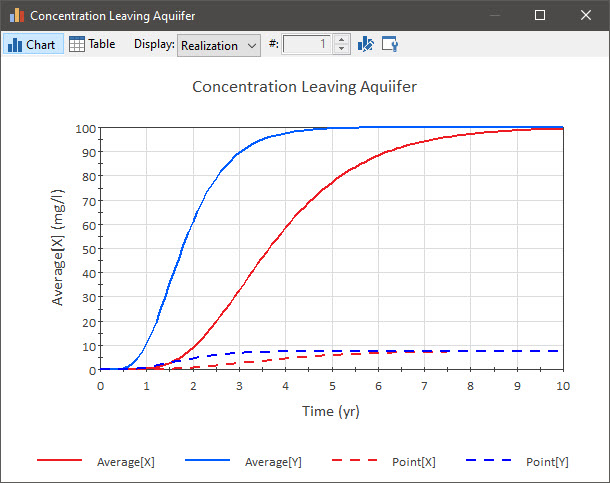 What we see is that the actual point concentration (along the centerline of the plume 5 m below the water table) is about ten times smaller than the “average” concentration computed leaving the Aquifer.  What is this telling us? Recall that the average concentration is being computed assuming a constant pathway area that is equal to the source area.  This is the same as assuming that all of the mass is well-mixed horizontally and vertically but confined (for the entire 1 km pathway length) to a rectangular area that is 5 m by 10 m. This is a very thin and narrow plume indeed.  The point concentration is telling us that if we were to account for transverse and vertical dispersion, the plume would actually be much wider (and deeper) than that, such that the concentration at any given point would be less than this “average” concentration.  As we have noted previously, however, if our primary concern is the concentration in the stream, this is of little interest (as the horizontal and vertical dispersion do not impact the mass transfer rate to the stream).

Note: The Plume function is based on an analytical approach for simulating the 3D transport of a contaminant plume. The details of the calculation are described in detail in Appendix B of the Contaminant Transport Module User’s Guide (in the section entitled Plume Function Details).