Lesson 9 – Introduction to the Pipe Pathway

In the previous Lessons in this Unit we have described the use of the Aquifer pathway for solving the one-dimensional advection-dispersion equation.  As we discussed, this element spatially discretizes the pathway (into Cells) and uses a finite difference approximation to solve the equation.

GoldSim also provides an alternative way to solve the one-dimensional advection-dispersion equation. In particular, the Pipe pathway can be thought of as an analytical approach to solving the equation.  It uses Laplace transforms, which solve differential equations by converting them into algebraic equations. We won’t go into any further detail in this Course on how Laplace transforms do this (you can read about this in any differential equations textbook if you are curious).  For the purposes of this Course, you can simply view it as an approach that solves the equation without requiring use of spatial discretization. The details, of course, are also provided in Appendix B of the Contaminant Transport Module User’s Guide.

In this Lesson, we are going to introduce the Pipe element, and compare and contrast it with the Aquifer element. To do so, we are going to walk through the simple system we described in Lesson 3: a horizontal tube filled with saturated sand.

Recall that the tube has cross-sectional area A and length L, and is filled with a porous medium (sand with porosity n and bulk density rho) and is completely saturated with water.  Water enters at one end and exits at the other end (at a flow rate of Q). The water introduced at the upstream end of the tube (uniformly across the entire cross-sectional area) contains two species (X and Y) at a constant concentration S. One of the species (Y) partitions onto the sand, while the other does not. The degree of dispersion is quantified in terms of the (longitudinal) dispersivity (alpha).

Go to the “Examples” subfolder of the “Contaminant Transport Course” folder you should have downloaded and unzipped to your Desktop, and open a model file named ExampleCT26_Aquifer_Pipe.gsm.  The model looks like this: 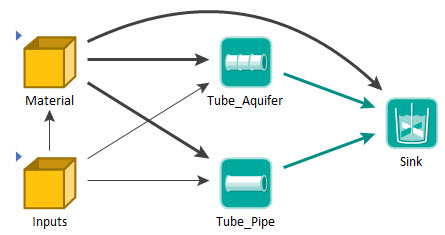 Let’s first open the Aquifer element to refresh our memory on what it looks like: 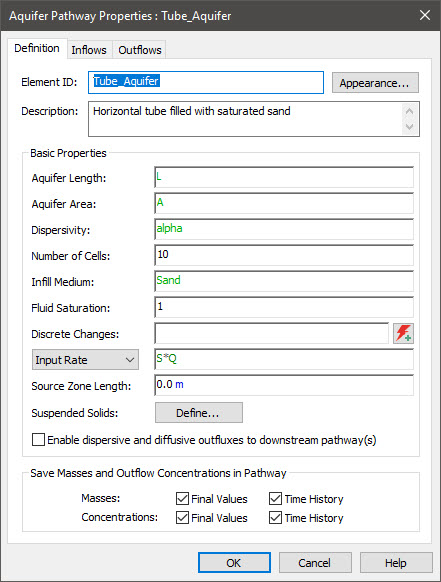 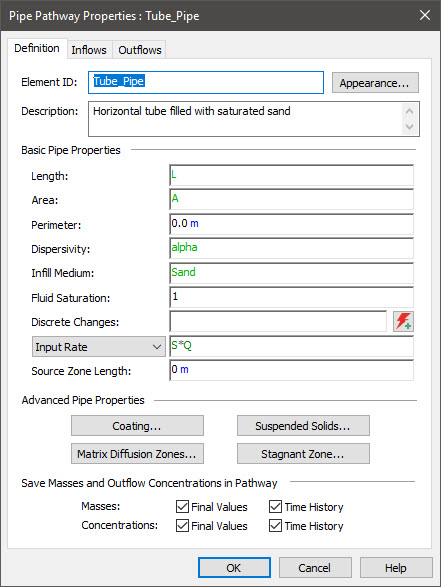 As you can see, the two elements share the following inputs:

The Inflows and Outflow tabs are also identical.

How are the two pathways different?  They are different in the following ways:

In this Example model we want to compare these two pathways.  As mentioned above, there are several features that are provided by the Pipe that are not provided by the Aquifer.  However, none of those features are used in this Example.  The only difference (other than the solution method) is the downstream boundary condition. As noted in Lesson 7, the Aquifer has two options for the downstream boundary condition:

The downstream boundary condition for the Pipe pathway, however, is as follows:

Concentration goes to 0 as x goes to infinity.

Effectively, this allows dispersive/diffusive outfluxes, with a downstream concentration that is not set to zero (as is the case for the Aquifer if the box is checked), but is actually quite close to the concentration leaving the Pipe (resulting in a low dispersive outflux). If you think carefully about this, you will realize that the Pipe boundary condition is close (but not identical) to the default Aquifer boundary condition (no dispersive flux).

If you run the model and open the “Concentration Leaving Tube” you can see that the results for the Aquifer (using the default boundary condition) and the Pipe are effectively identical: 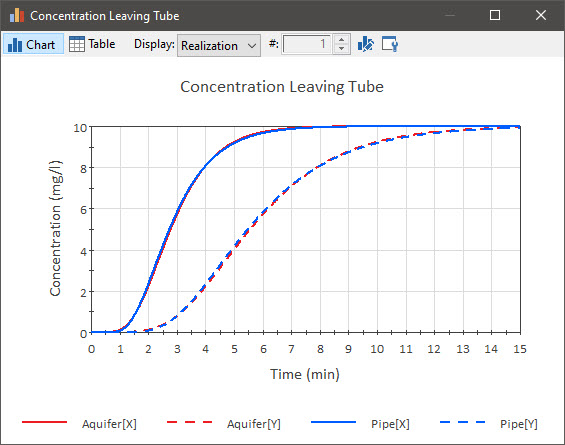 Learn More in GoldSim Help: Summary of Limitations on the Use of Pipe Pathways

However, there is one set of systems that cannot be simulated using Aquifers, but can be simulated using Pipes: those involving transport through fractures. In particular, contaminant transport through fractures typically includes some specialized processes that can be readily represented using Pipes (but not by Aquifers). We will discuss this in the next Lesson.