Lesson 11 – Exercise: Simulating Suspended Solids in an Aquifer or a Pipe

In Unit 7, Lesson 8 we discussed the transport of species between Cell pathways via suspended Solids. We pointed out that suspended Solids can have a potentially large impact on transport.  In particular, for species that sorb onto the suspended Solids, the effective concentration in water (and hence the advective mass transfer rate) can be significantly increased.

Because suspended Solids have the potential to be so important, both Aquifers and Pipes can also be specified as transporting species mass on suspended Solids.  We will discuss how this is done (and work through a simple Exercise that includes suspended Solids) in this Lesson.

Aquifers and Pipes both have a button for defining Suspended Solids. If you press the button, the following dialog appears:

An Aquifer (or Pipe) can have a single suspended Solid for which you must define the Solid Medium (the Solid suspended in the flowing Reference fluid) and the Concentration (the concentration of the suspended solid in the Reference Fluid).

Suspended solids in an Aquifer or Pipe can increase the "carrying capacity" of the pathway fluid, by allowing solute species to sorb onto and be transported by particulates.  This has the effect of reducing retardation due to sorption onto the infill material.  Mathematically, suspended solids in an Aquifer can be thought of as increasing the effective concentration in the pathway fluid, thereby increasing the mass flux of species out of the Aquifer.  In particular, the concentration of a species in the presence of suspended solids is computed as follows:

Note: If your Aquifer or Pipe has a suspended Solid onto which species partition, the concentration output of the pathway represents the total (effective) concentration (and not just the dissolved concentration).

When we create an advective Outflow from an Aquifer or Pipe with suspended Solids, the following points are important to note:

Note: If your Aquifer or Pipe has an Infill Medium (i.e., you are simulating flow through porous media), it would often be inappropriate to specify that a Solid was suspended (unless the particulates were very small), as most suspended particles would likely be filtered out. There are cases, however, when transport on suspended Solids in porous media can be important (e.g., transport of colloids through course-grained materials).

To close this Lesson we will do a simple Exercise that shows the impact of transport on suspended Solids in an Aquifer (the results for a Pipe would be the same). To do this, we will simply build on a previous Exercise we completed at the beginning of this Unit. You should have saved this to the “MyModels” subfolder of the “Contaminant Transport Course” folder on your desktop, and named it ExerciseCT12.gsm. If for some reason you do not have that model, open ExerciseCT12_Aquifer.gsm in the “Exercises” subfolder.

Recall that this model represented the following system:

A square trench is dug into the ground (with a very shallow water table) and some waste is deposited below the water table (into a sandy aquifer).  The waste contains two contaminants (X and Y) that are present at fixed concentration effectively indefinitely (e.g., due to a solubility constraint). This forms a contaminant plume that flows along the water table.  Species X is sorbed onto the sand, but species Y is not sorbed at all. The entire plume eventually discharges to a stream and is quickly mixed across the width and depth of the stream.  The flow rate through the aquifer and in the stream is assumed constant.

In this Exercise, we are simply going to make the following changes:

The new input parameters describing this system are summarized below:

To update this model, you should follow these steps:

Once you are done with your model, save it to the “MyModels” subfolder of the “Contaminant Transport Course” folder on your desktop (call it ExerciseCT14.gsm). If, and only if, you get stuck, open and look at the worked out Exercise (ExerciseCT14_Aquifer_Colloids.gsm in the “Exercises” subfolder) to help you finish the model.

These changes were very simple, so we won’t bother to walk through the model. Run the model and view the concentrations in the stream: 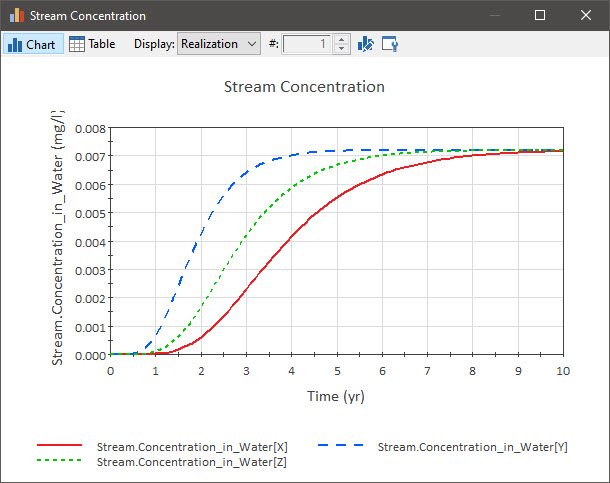 Recall that X sorbs onto Sand (but not the mobile Colloids), Y sorbs onto neither, and Z sorbs onto both. Z breaks through slower than Y (since it interacts with the Sand), but faster than X (since it also interacts with the mobile Colloids).  This illustrates the potential importance of a suspended Solid (such as a Colloid). Even though Z is sorbed by the Sand, its strong partitioning onto the Colloid enhances its transport.