Lesson 5 – How Does an Aquifer Work?

Now that we have introduced the Aquifer and described how to define its basic inputs, in this Lesson we are going to take a brief detour and describe how the calculations in the Aquifer are actually carried out. As we have noted, Aquifer pathways solve the advection-dispersion equation by using a finite difference approximation that discretizes space into a series of finite volumes. It actually does this by creating a temporary set of linked Cell elements during the simulation (while in Run Mode), which are subsequently removed at the end of the simulation. This is actually completely transparent to the user (you never actually see these Cells under normal circumstances), and you really do not need to know these details to use an Aquifer element. As we have noted throughout this Course, however, as a general rule, you should not use “black boxes” to build models.  Understanding how a tool works makes you a better user of that tool. Therefore, in this Lesson, we will briefly explore (and actually view) these temporary Cells in order to provide a better understanding of how the Aquifer element carries out its calculations.

To do so, let’s return to the Example we looked at in Lesson 3. Go to the “Examples” subfolder of the “Contaminant Transport Course” folder you should have downloaded and unzipped to your Desktop, and open a model file named ExampleCT25_Aquifer.gsm.  Recall that the model looks like this: 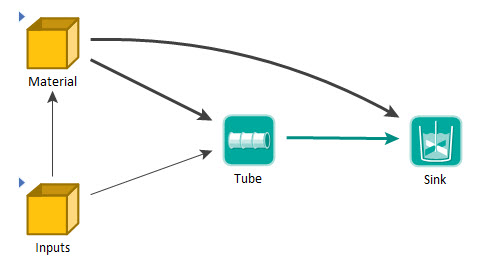 To see this, we need to pause the model while it is running. Pausing a model is discussed in GoldSim Help.

Learn More in GoldSim Help: Pausing and Stepping through a Simulation

The easiest way to cause a model like this to pause (since it runs very quickly) is to not use the Run button, but use the toolbar button that moves the simulation forward one timestep:

When you press this button, it moves the simulation forward one timestep and then pauses.  Do this now.

When you do so you will see that while the model is in Run Mode (or paused as it is in this case), an Aquifer pathway takes on some characteristics of a Container. In particular, the Aquifer pathway will look like this (i.e., like a Container, it has a small triangle in the upper left-hand corner of the element indicating that you can “look inside”):

If we click on the triangle to “look inside” the Aquifer, we see the following:

As can be seen, ten temporary Cells have been created (named “_pathwayname_Celln”). Opening the first Cell, we can see how the Media are defined:

To simulate advection and dispersion/diffusion through the linked Cells, GoldSim automatically creates a number of advective and diffusive flux links.  For example, here is the Outflows tab from the second Cell: 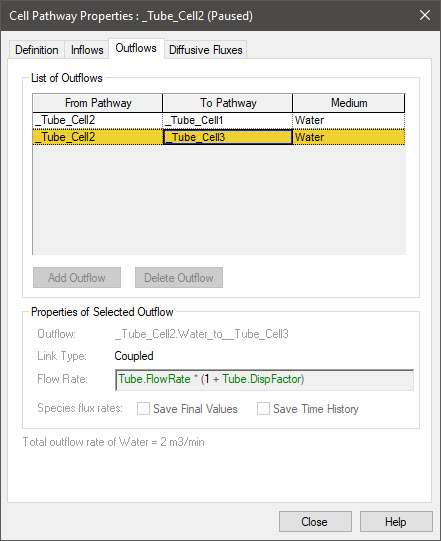 Note that there is another Outflow in the Outflows tab, and it is from Cell2 to Cell1 (upstream!).  If we were to look at this, we would see that this upstream Flow Rate was defined as Q*DispFactor.  That is, in addition to the downstream flow that we would expect (Q), GoldSim has added two “fictitious” flows equal to Q*DispFactor (one upstream and one downstream). Note that since one fictitious flow is downgradient and one is upgradient, the net of these two flows is zero.  However, they have the effect of representing longitudinal dispersion in the pathway.

If we sum all of the inflows and outflows up for a given Cell, what we would find is that the rate of change of mass in, for example, Cell2, accounting for both advection and dispersion, is being approximated as follows:

Where does this come from?  Recall from Lesson 2 that the finite difference approximation to the advection-dispersion equation looks like this:

In this equation, the tube has been discretized spatially into a fixed number of finite volumes (of length Δx). Recall that for a saturated system, v is equal to Q/n, α is the dispersivity, and Dm is the molecular diffusion coefficient. The equation involves the concentration (C) in three adjacent volumes: j, j-1 (which is immediately upgradient of j) and j+1 (which is immediately downgradient of j). The superscript k refers to the timestep (k is the current timestep k-1 is the previous timestep, and Δt is the timestep length). There is an equation for every volume so, for example, if the tube was divided into 10 finite volumes (as it is in this example), there would be 10 equations with 10 unknowns for each contaminant being modeled.

By algebraic rearrangement, it can be readily shown that this finite difference approximation results in the mass rate of change in each Cell in the equation shown above (involving the DispFactor).

Note: If you are interested in the details of how the finite difference approximation results in the mass rate of change in each Cell (involving the DispFactor), a detailed explanation is provided in Appendix B of the Contaminant Transport Module User’s Guide (in the section entitled Aquifer Pathway Details).

Note: The algebraic rearrangement discussed above does not include the diffusion term. To account for the effect of molecular diffusion on the longitudinal dispersion, GoldSim also automatically adds diffusive connections between the Cells (which in most cases is likely to be negligible).

If you press the Run button the model will run to completion and you will see that the Aquifer no longer looks like a Container (you cannot “look inside”).  This is because after the simulation completes, all of the temporary Cells are deleted.

As pointed out at the beginning of this Lesson, the use of the temporary Cells is actually transparent to the user (you never actually see these Cells under normal circumstances, and you really do not need to know these details to use an Aquifer element). However, this level of understanding will make you a better user of the software, and could potentially be of value in the future as you become more of an expert user.  You could use it, for example, to recreate the dispersive behavior of an Aquifer element by manually creating and connecting a series of Cells in order to represent a complex system that perhaps could not be adequately represented using an Aquifer alone.