Lesson 7 – Representing the Boundary Conditions for an Aquifer Element

In this Lesson we are going to discuss two input fields for the Aquifer that we skipped in Lesson 4 (highlighted below): 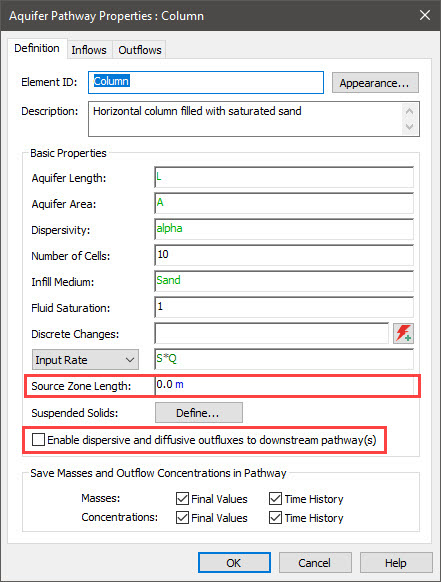 These inputs determine how the boundary conditions of the Aquifer element are represented.

This is useful, for example, if your Aquifer represents a pathway that is being loaded from above with mass from source which is of such an areal extent (e.g., a landfill) that it extends over a significant portion of the pathway and therefore cannot be treated as entering at the beginning of the pathway.

A number of points regarding the use of the Source Zone Length are worth noting:

We will work on an Exercise in the next Lesson that uses the Source Zone Length.

If this box is cleared (the default), only advective transport out of the pathway is allowed.  If the box is checked, a zero concentration in the receiving pathway is assumed, and dispersive and diffusive transport into downstream pathways is allowed.

In the previous Exercise, we did not discuss this setting (and hence you probably left it at its default setting). However, due to the low concentration in the stream (relative to the groundwater pathway), checking the box (allowing dispersive/diffusive fluxes and assuming a zero downstream concentration) would probably be more appropriate.  To see the impact, you can rerun the model from that Exercise with the box checked. The plot below shows the concentration in the stream for species X (which sorbs onto the sand) with and without the box checked (i.e., with and without dispersive fluxes allowed): 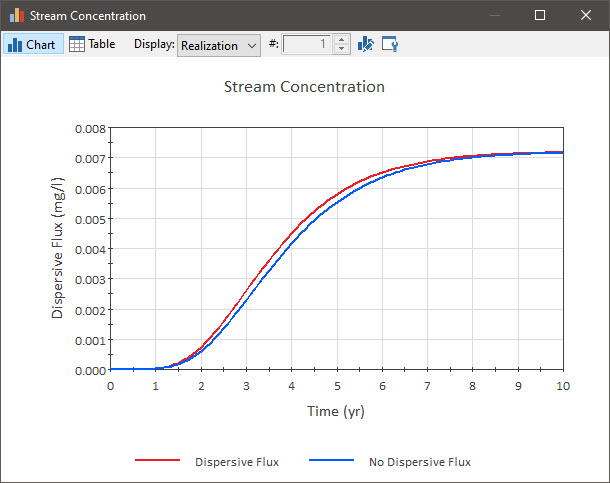 As can be seen, allowing dispersive/diffusive outfluxes results in a (slightly) faster breakthrough.