In this Lesson we will work through a simple Exercise to use the boundary condition options we discussed in the previous Lesson.

This example is shown schematically below:

Waste material is placed in a trench at the ground surface a small distance above the water table. The trench is 100 m long.  A single contaminant (X) is spread out along the entire length of the trench. It is assumed that this contaminant trickles downward and eventually reaches the water table, where it enters a sandy aquifer (at a constant rate). In this simple model, we will not simulate the vertical transport downward; instead we will simply assume mass enters the water table at a fixed rate over the length of the trench.

The contaminant plume subsequently flows along the water table. The contaminant is not sorbed onto the sand. The entire plume eventually discharges to a stream and is quickly mixed across the width and depth of the stream.  For the purpose of this simple Exercise, we will assume that the flow rate through the aquifer and in the stream is constant. Our objective is to predict the concentration of the contaminants just downgradient of where the groundwater plume discharges into the stream (where the stream is assumed to be well-mixed).

Once you are done with your model, save it to the “MyModels” subfolder of the “Contaminant Transport Course” folder on your desktop (call it ExerciseCT13.gsm). If, and only if, you get stuck, open and look at the worked out Exercise (ExerciseCT13_Aquifer_Source_Length.gsm in the “Exercises” subfolder) to help you finish the model. 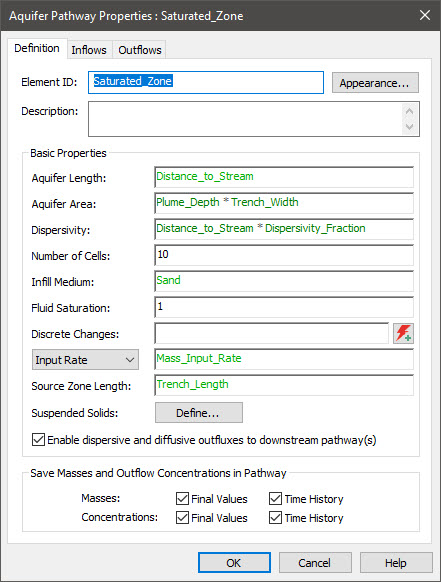 Note that you should have specified a Source Term Length, defined an Input Rate, and checked the box to Enable dispersive and diffusive outfluxes to downstream pathway(s).

As we did in the previous Exercise (for the reasons discussed there), we are assuming that the vertical and transverse spread of the plume along the flow path is negligible (i.e., the Area of the pathway remains constant along its length). We’ve assumed a (somewhat arbitrary) plume area controlled by an assumed mixing depth for the plume and the width of the overlying trench.

Note that the plume flow rate (the flow rate leaving the Aquifer and entering the stream Cell) is computed as follows:

The stream Cell is defined in exactly the same was as it was in the previous Exercise (by assuming a small volume that turns over rapidly).

If we run this model and plot the concentration in the stream it should look like this: 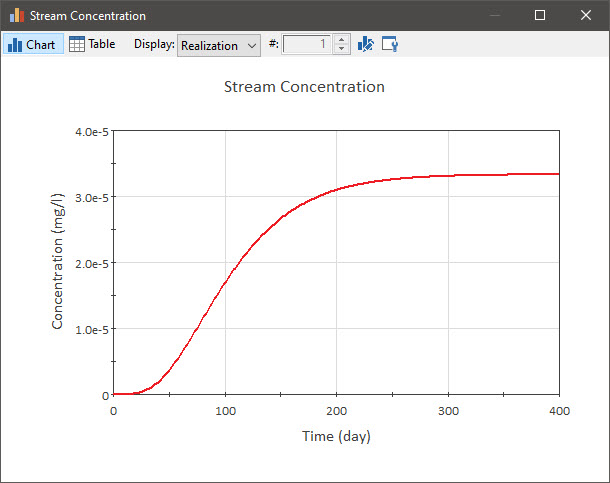 The plot below shows the concentration in the stream with and without the Source Term Length specified:

As you would expect, when the mass enters over 100 m of the pathway (as opposed to only at the beginning), it reaches the stream faster.