Lesson 4 - Defining the Basic Inputs for an Aquifer Pathway

In the previous Lesson we provided a basic introduction to the Aquifer element.  In this Lesson we will discuss in more detail how the inputs are specified.

Let’s remind ourselves what the Aquifer dialog looks like: 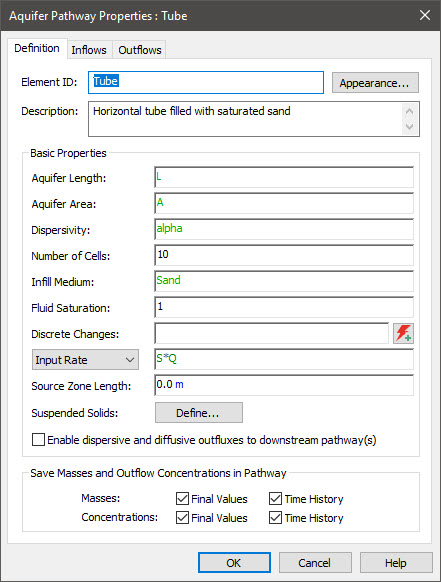 Let’s start with the most fundamental inputs: the Length and the Area.

Specifying the Length is straightforward. Although in most cases the length is constant for most systems that you will simulate, GoldSim allows it to change during the simulation.  This would most commonly be done by shortening the pathway (e.g., in order to simulate the end of the pathway eroding away). When the pathway is shortened, mass that was present in the truncated portion of the pathway is immediately flushed from the pathway (to downstream pathways).

The Area is the cross-sectional area at the outlet end of the pathway (perpendicular to the flow).  In the Example we discussed in the previous Lesson specifying the Area was straightforward (since it was a tube, and the area of the tube is well-defined).  But in most cases, you will be using the Aquifer element to simulate an environmental component such as a groundwater pathway. In such cases, the appropriate Area to specify may not be obvious, and is therefore worth discussing further.

You may recall from the previous Lesson that the expected travel time for a (fully saturated) pathway can be estimated as follows:

From this, you might initially conclude that choosing a larger Area would result in a longer travel time.  That would be correct if the flow rate were independent of Area, as in modeling a fixed flux through pipes of various diameters. But this would be incorrect if we assume that the flow rate (Q) is a linear function of the Area.  Since we are modeling a section of an aquifer, our choice of Area does not change the flow velocity. So if you increased the Area, to maintain consistency, you would also need to increase the flow rate.  As a result, changing the Area has no impact whatsoever on the travel time. This means that Area also has no impact on the mass rate leaving the pathway (or therefore the total mass in the pathway). What it does impact, however, is the concentration leaving the pathway. In particular, the concentration leaving the pathway is inversely proportional to the Area. This makes sense, of course, since you can think of the concentration as the mass rate divided by the fluid flow rate.  As we just stated, changing the Area has no impact on the mass rate, but it directly impacts the flow rate.

To understand the implications of this, it is important to understand what we are really trying to represent with a 1-D groundwater pathway.  What we are trying to simulate is essentially a plume. Plumes, of course, are not one-dimensional at all. When mass enters the groundwater, it spreads and disperses not only longitudinally, but also transversely and vertically, and illustrated schematically below:

At any given longitudinal distance from the source, if you were to look at a cross-section of the plume (perpendicular to the flow direction), the concentration would vary across that surface.  At that distance you could conceptually define the area based on a concentration contour.  But of course the contour you would select is somewhat arbitrary and the area associated with any contour would change with time (unless it reached a steady-state). (As an aside, one outcome of modeling plumes assuming Gaussian disperson is that they have no “edge”. Mathematically, they extend an infinite distance with an infinitesimal concentration at that distance. A plume cannot therefore be shown to have an actual extent, and depiction relies on the use of isopleths, or lines of constant concentration.)

So how do we select an appropriate Area? As pointed out above, the Area impacts the computed concentration leaving the pathway (but does not affect the mass discharge rate).  To understand how to select the Area it is important to keep in mind what we are actually trying to calculate.  You might say that what we are trying to do is compute a concentration at a specific point in space (at a certain X, Y and Z coordinate). Although as we will discuss in Lesson 13 GoldSim does provide a way to estimate that, it is typically not realistic to try to do so.  Real plumes do not look anything like the schematics shown above. Instead, due to heterogeneities in the subsurface environment (as well as the source term), real plumes (even in well-sorted homogeneous materials) tend to be very irregular indeed. As a result, predicting a concentration at a specific coordinate is generally not very meaningful.

Fortunately, for most applications, this is not actually what is required at all.  Most often, what we are really interested in is a mass discharge rate into a particular feature or across some plane surface (e.g., a well, a river or some other surface water body), in which case the Area actually has no impact.  This mass is then mixed (and diluted) by additional water.  Hence, what we are typically interested in is not a concentration at a point in space, but one that is averaged (due to mixing within the downstream feature).

As a result, the concentration output of the Aquifer is typically not very meaningful.  And because this is the only output that is affected by the Area, how the Area is specified is not of particular importance!  In most cases, you will simply define it so it represents a “reasonable” estimate of the extent of the plume (typically determined by the dimensions of the source and/or perhaps the thickness of the aquifer).

The other four basic inputs for the Aquifer were discussed in the previous Lesson, but several points are worth discussing in a bit more detail here.

We will discuss the other input fields in this dialog (which represent advanced features) in subsequent Lessons.

Before leaving this Lesson, however, let’s discuss one more fundamental input for an Aquifer; the flow rate.  As mentioned in the previous Lesson, all Aquifers must have at least one advective mass flux link to another pathway with a positive Flow Rate defined: it is the only way to define the flow rate through the Aquifer. Otherwise, GoldSim will generate a fatal error message. Several points should be noted regarding flow rates: