Now that we know how to use an Aquifer element and also understand the basics of how it works, in this Lesson we will work through a simple Exercise.

This example is shown schematically below:

A square trench is dug into the ground (with a very shallow water table) and some waste is deposited into a sandy aquifer so that it is entirely below the water table (this obviously would be a very bad way to dispose waste!). The waste contains two contaminants (X and Y) that are present at a fixed concentration effectively indefinitely (e.g., due to a solubility constraint). This forms a contaminant plume that flows along the water table.  Species X is sorbed onto the sand, but species Y is not sorbed at all. The entire plume eventually discharges to a stream and is quickly mixed across the width and depth of the stream.  For the purpose of this simple Exercise, we will assume that the flow rate through the aquifer and in the stream is constant. Our objective is to predict the concentration of the contaminants downgradient of where the groundwater plume discharges into the stream (at a distance where the stream is assumed to be well-mixed).

Once you are done with your model, save it to the “MyModels” subfolder of the “Contaminant Transport Course” folder on your desktop (call it ExerciseCT12.gsm). If, and only if, you get stuck, open and look at the worked out Exercise (ExerciseCT12_Aquifer.gsm in the “Exercises” subfolder) to help you finish the model. 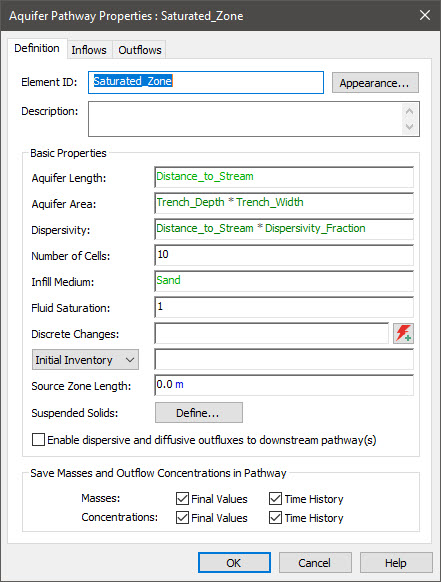 In Lesson 4, we noted that the Area is the cross-sectional area of at the downstream end of the pathway (perpendicular to the flow). In this case, however, we defined the Area as the cross-sectional area at the beginning of the pathway (the trench depth multiplied by the trench width). That is, we are assuming that the vertical and transverse spread of the plume along the flow path is negligible (i.e., the Area of the pathway remains constant along its length). In most natural systems, of course, this is not accurate, as due to the spreading of the plume, it will entrain some clean water (and the Area will increase unless it is somehow constrained by neighboring impermeable materials). In fact, as we will see in Lesson 13, due to horizontal (transverse) and vertical dispersion, the actual area of the plume would likely be considerably larger than the source area by the time it discharges into the stream.  We could have assumed a larger Area to account for this.  Doing so, however, would not impact the result we are trying the compute (the concentration in the stream).  If we increased the Area here, we would also need to increase the flow rate leaving the pathway accordingly.  As a result, the flow rate entering the pathway would be less than the flow rate leaving the pathway, and this would indeed result in a decrease of the average concentration leaving the pathway due to this dilution.  But this output (the average concentration leaving the pathway) is not very meaningful in this model (and as discussed in Lesson 4, is rarely meaningful); it is not something we are interested in. We are interested in the concentration in the stream.  And changing the Area (and the corresponding flow rate) does not have any impact on the travel time of the contaminants or the mass transfer rate into the stream (and hence the concentration in the stream). Of course, it is critical here that the flow rate we specify leaving the pathway be consistent with the Area that we specify (the flow rate increases linearly with the Area).

Note that the plume flow rate (which in this case represents the flow both leaving and entering the pathway) is computed as follows: 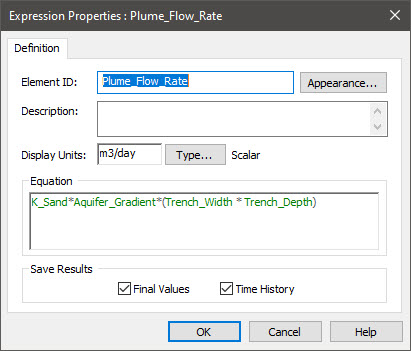 Let’s now open the Stream Cell.  What does the volume represent? Physically, we can think of it as being on the order of the river length over which we can assume complete mixing (we’ll assume 3 widths of the plume) multiplied by the width of the stream multiplied by the depth of the stream. Recalling that the plume width is 5 m, and assuming a stream width of 5 m and a stream depth of 1 m produces a value of 75 m3. Such a small volume “turns over” very rapidly: 75 m3 divided by 300,000 m3/day results in a that volume being flushed in less than a minute.  As such, it responds effectively immediately to any changes in the mass rate from the plume. If we assumed a considerably larger plume area (and hence a larger volume for the Stream Cell, it would still flush very rapidly, hence our results are not sensitive to this volume.

If we run this model and plot the concentration in the stream it should look like this: 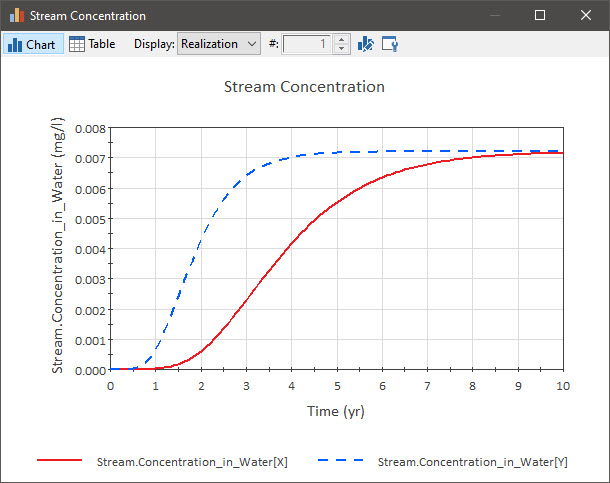 Because X partitions onto the sand in the groundwater pathway, its breakthrough curve is delayed.  Ultimately, however, steady state is achieved and both species reach the same concentration in the stream.  In this very simple model this steady-state concentration is simply equal to the rate at which mass is entering the system (the plume flow rate multiplied by the concentration) divided by the stream flow rate.

Make sure that you save this model to the “MyModels” subfolder of the “Contaminant Transport Course” folder on your desktop (call it ExerciseCT12.gsm), as we will revisit it later in this Unit.